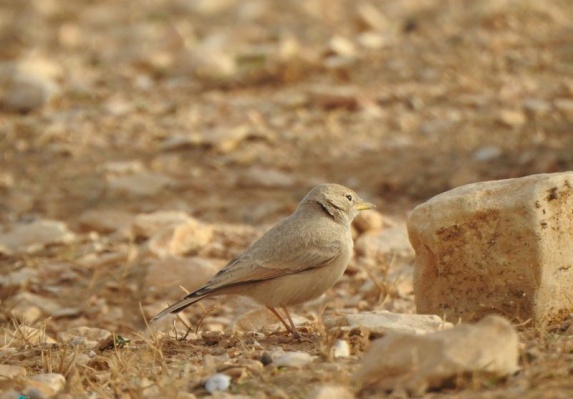 © All rights reserved by www.mahmiyat.ps , Picture from Jerusalem Wilderness

A medium-sized bird with a pale sandy color and yellow bill. It feeds on small invertebrates, seeds, plants, and insects, especially in the reproduction season, as they are usually seen walking on the ground looking for them, lives in various desert habitats including sandy plains and rocky cliffs, has slightly dull plumage that can vary from very pale to dark. The plumage of the desert lark matches perfectly with the colour of the desert soil. The underparts of this lark are dull gray and have much more stripes than the rest of the other species.

The desert lark lacks the clearly defined black stripe on the tail, as the colour difference is proportional mainly to the natural habitat, sandy-colored birds are more common in sandy areas while gray is common in rocky areas and darker birds in the basalt rocks desert. The desert lark is spread in several geographical regions, especially the desert of Mauritania, Western Sahara, and southern Morocco in the west and east crosses North Africa south to Chad and Somalia, through southwest Asia to western India, and is found in Iran to Afghanistan and in the Mediterranean region, where it is a resident bird in several habitats in Palestine.

The wingspan is 27-30 cm, weight in grams 20-28, size is about the size of a sparrow, lives far from local movements in arid rocky areas, and avoids flat sands. It nests on the ground in a rocky crevice or between stones, and it lays 3-4 eggs.

In Palestine: common resident in desert and wilderness in the south