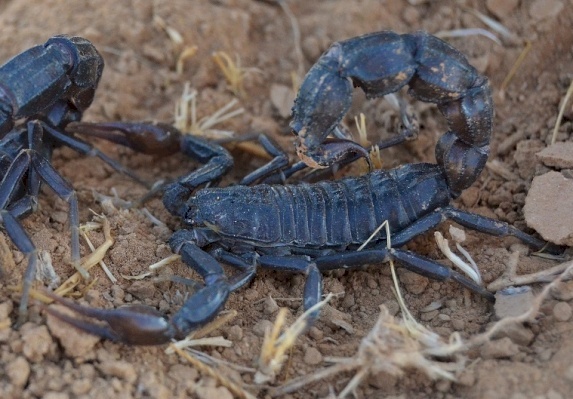 The Arabian Fat-Tailed scorpion belongs to the Buthidae family in the Scorpiones (scorpions) order, of the Arachnida (arachnids) class. The Arabian Fat-Tailed scorpion is considered as one of the most venomous scorpions in its distribution areas as well as in Palestine – actually, it is believed to be the most dangerous species in the area, after the Deathstalker. The Arabian Fat-Tailed scorpion is a relatively-large scorpion with a very massive metasoma – often (mistakenly) referred as "tail", which makes it, in adulthood, to look larger and more massive than it actually is. The adult females of this species may reach up to 100mm, when the metasoma and pedipalps ("pincers") thickens with each molt, during the growing and developing process. It is not widely abundant as the Deathstalker as it is more choosy about its habitats, and hence so, sting reports in humans involving this species are not common. Although this is one of the most venomous scorpion species in Palestine as described above and there is no antivenom in presence locally, the treatment is very effective and death cases in the area are extremely rare. The adults and sub-adults of this species can be easily identified by its overall brown-to-black coloration with brown ends of the walking legs and fingers, as well as extended and enlarged (but not bulged) pedipalps ("pincers"). The thick, enlarged pedipalps and fingers can easily distinguish it from the Black Fat-Tailed Scorpion, which shows very thin ones. A very thick metasoma ("tail") is presence as well. Another unique recognition feature of the whole Androctonus genus is a cut, a slit on the 4th metasomal segment, which looks like it was roundly peeled by an art-knife. Although the juveniles do not show the thickened metasoma saliently, they definitely show this cut. Its genus scientific name was derived from Greek: "Androctonus" – "andras" stands for man and "kteinein" stands for "to kill" or "killer". The species name "crassicauda" is latin, and stands for thick ("crassi") tailed ("cauda")". Its diet, as many other scorpions species, is based on small invertebrates, but as some other massive and relatively large species, the Arabian Fat-Tailed Scorpion might prey on small vertebrates (such as geckos) from time to time as well. In most cases, this scorpion species hits with the side of its muscled metasoma when being disturbed from the sides of its body, in try to keep afar and remove the threat. It tends to sting readily if kept disturbed or being disturbed from the front, and well known for potentially being hot tempered. In some cases, the Arabian Fat-Tailed Scorpion might stay in a single place and sting repeatedly if kept being disturbed, but will run for shelter if the threat won't be eliminated. Of course, this behavior might change in different specimens. The Arabian Fat-Tailed Scorpion (Androctonus crassicauda) is distributed in the Arabian Peninsula, Caucasus, Egypt, Iran, Iraq, Kurdistan, Palestine, Sinai, Syria, Turkey, and some more countries in the area. Distribution of the genus (Androctonus) is wide, and includes North Africa, Sinai and Arabian Peninsula, the Middle East and eastwards to Afghanistan and Pakistan. In Palestine – not common, but may be found in small population concentrations where this species is distributed. It mainly found on mountainous areas (both Mediterranean and arid to desert), stony deserts and sandy soils.