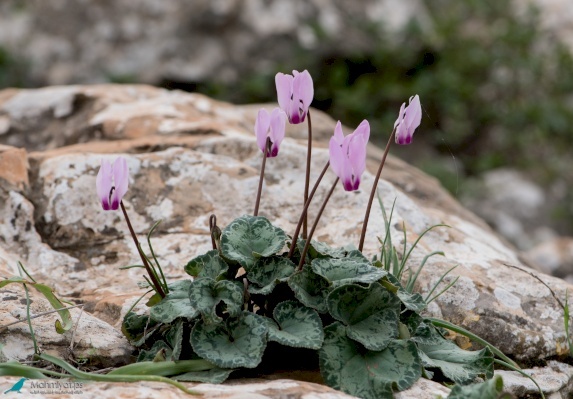 Cyclamen persicum is a small perennial plant bearing very characteristic heart-shaped leaves and a large round tuber. The flowers have five petals coloured white to pink, with a purple spot at their base. The plant bears leaves from autumn to spring, and goes dormant in the summer. Most populations bloom during late winter-early spring, from December to April, but some populations bloom in autumn-early winter, from October to December, with the flowers appearing before the leaves. The species, which belongs to the Primulaceae family, inhabits shaded rocky Mediterranean habitats. It is distributed around the Mediterranean Sea, from Greece to Palestine, and Jordan, as well as in Algeria and Tunisia. It is a hardy species, often persisting even in urban habitats. In Palestine, it grows mostly in the western, mountainous part of the country. The flowers exhibit adaptations to blooming during the harsh rainy season. A single flower blooms for as long as three weeks. Furthermore, the flowers' sexual organs are directed downwards and concealed below the petals, to protect them from rain. The flowers are pollinated by a variety of insects such as honey bees and hover flies, as well as tiny insects such as thrips and a minute species of moth. The pollinated flowers develop into small round pods, and their stems bend down, possibly to assist the dispersion of seeds into rock crevices. The tuber is poisonous and contains toxic chemicals such as cyclamin, that are investigated as potential treatments for cancer. A traditional method of catching fish by local Arabic fishermen, involves poisoning them with a powder made of tubers of cyclamen and seeds of Styrax officinalis, which is sprinkled on the water. Due to its hardiness and showy flowers, Cyclamen persicum is commonly cultivated as a garden plant, and many different colour variants have been developed.