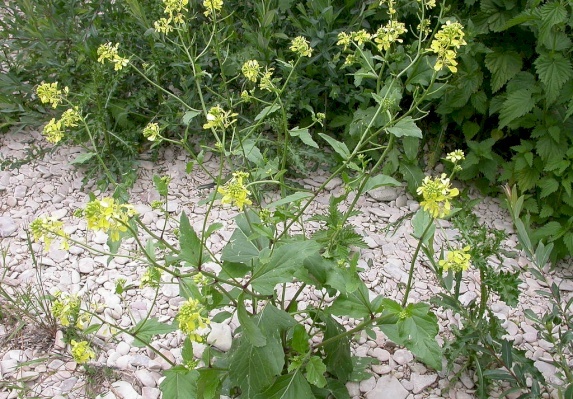 A very common annual herbaceous plant of the Brassicaceae family it can grow to a height from 30-60 cm, and its presence is greatly felt in the Mediterranean areas. Its straight stems and its .alternating, lobed, leaves are covered with bristly hairs. All parts of the plant have a distinctive sharp taste of mustard.

The flower is organized as a raceme. The organs of the flower are in multiples of four as is characteristic of the family. The four yellow petals are at right angles one to the other, cruciform. Nectaries are found at the base of the four interior stamens, encouraging pollination by insects, and the ovary is superior.

Flowering period: It flowers from December to May. The fruit is a long, thin, bristly pod containing 5-8 seeds.

Ecology: It is generally found in large numbers filling fields, empty lots, and along roadsides. It grows in heavy soils. A field full of Charlocks can become a habitat of its own for a large diversity of insects. And a breeding habitat for the Graceful Prinia and Greater Whitethroat Warblers.

Common and medicinal uses:  Oil in which the seeds were heated is used as a remedy for ear infection and pain of the joints and back. Eating the stem and leaves is believed to strengthen the body and clean the digestive system. Drinking water in which the seeds were cooked is considered a treatment for kidney stones and liver problems.

Distribution in Palestine: It may be found throughout the mountains and deserts of Samaria and Judea as well as other Mediterranean areas. Very common in empty fields.