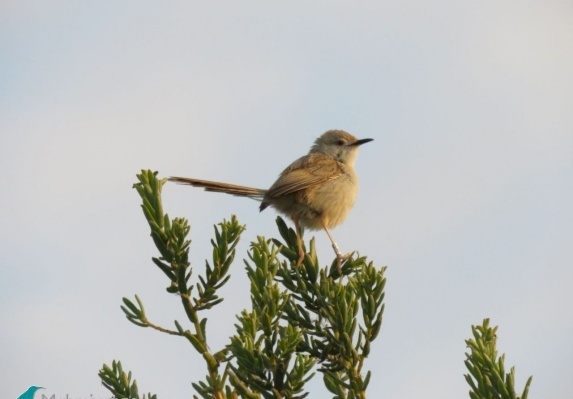 The Graceful Prinia has a grayish-brown body with thin streaking on the head and light underparts. Its tail is long, tapering and often cocked, with a black "eye" on the white-bordered tip of all the tail feathers. Its wings are short and rounded. In the mating season the male's beak becomes black whereas the female's stays a yellowish-brown. The graceful prinia is similar to the scrub warbler which lives in a more arid habitat and has a distinct white brow line. Behavior The Graceful Prinia is a tiny bird that doesn't stop moving while wagging its cocked tail from side to side and "singing" from protruding vantage points to claim its territory. Its flight is characteristic; it flies low, for short distances, with stops for hovering.

Habitat: The Graceful Prinia can live in many habitats among low dense vegetation, but won't be found among tall trees.

Vocalization: The Graceful Prinia is more often heard than observed, but the vocalization is not a pleasant sound that could be defined as a "song".

Breeding: The Graceful Prinia starts to breed from midwinter and can produce up to three clutches per year. Some couples are known to make as many as 7 nests and the female can lay as many as 4-5 clutches. This is partially due to the fact that the nest for the following clutch is built one week before the feeding of the fledglings is ended. Young birds can achieve sexual maturity within 2-3 months and may nest in their first year. In four days the male builds a closed, pear shaped nest in a fork in a low branch (at a height from 30-50 cm) from twigs, dried grasses, roots and leaves. After the structure of the nest is built, the female cares for the lining. The hatchlings weigh 0.8 grams and reach the weight of 7 grams in 9 days! That shows that insects can support a daily growth of 44%. The low height of the nest leaves it susceptible to damage by trampling, fire, predators, etc.

World distribution: The Graceful Prinia belongs to a family that lives in tropical and subtropical climates. It is very common in Palestine in all habitats that have some low vegetation. The world distribution ranging from the Horn of Africa, Sudan through to Palestine, Syria, east to India, Bhutan and Myanmar. Due to their hardy nature and adaptability, there is no danger to this species. The life expectancy of a Graceful Prinia is 1.5 years, but individuals have been known to live 5 years.