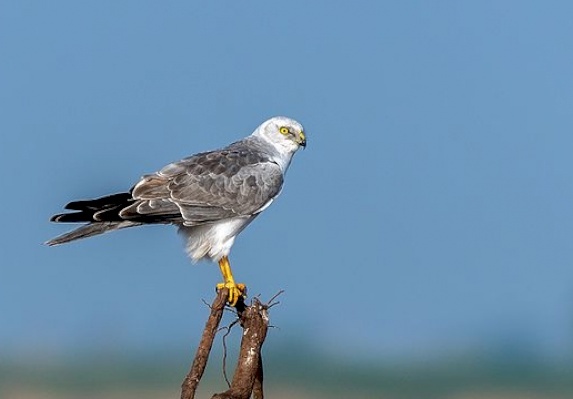 The Pallid Harrier is the smallest and most slender of all the Harriers. Its wing is long and narrow, held up towards the sky in a "V" shape in flight and the tail is quite long. Legs are very long and yellow, the bill is slender and has yellow cere. The male has a small number of black primaries that create a black wedged shape patch on the outer part of its wing. Its eyes are yellow. The female is brown and streaked all over with a very obvious dark collar to its neck and a dark patch on its ear coverts and cheeks, white rump and barred flight feathers. The Montagu's Harrier is similar and  has a similar shape but the male has obvious bars on its secondaries while the female has a much less conspicuous collar around its neck.

The Pallid Harriers hunt small mammals and birds in grassy habitats. The Pallid Harrier will usually identify a crowd of birds from a distance, approach them secretly in a low arch over the vegetation and surprise them from short distances. Its main strategy is to scare the birds and flush them and then catch them with its very long legs after a short pursuit. The Harriers are known to have good ears, surrounded by a rim of feathers that collect the sound waves like the Owls do. Using their ears they can locate the prey that hides in the vegetation.

The Pallid Harrier inhabits the steppe and grassland in Eastern Europe (Romania, Ukraine and Russia) and between the Black Sea and Baikal Sea in Siberia. The Harriers population is declining sharply due to loss of the steppe habitat that is gradually turning into cultivated fields, secondary poisoning in farm land and collision with powerlines.

In Palestine the Pallid Harrier is rare in winter in grass land and fields in the Jordan valley and Jenin area and is quite common in the eastern parts of Gaza strip. During migration the Harriers can be seen in all parts of the country and in most open habitats. Migration occurs in autumn between the end of August (peaking end of September) and in spring between March and late April, peaking mid-March.

The world population is sharply declining and estimated at 9000 to 15000 pairs.

The Harriers migrate during the day like other raptors using thermals and glide taking advantage of the hot air. But also like passerines with active wing flapping flight during the night.