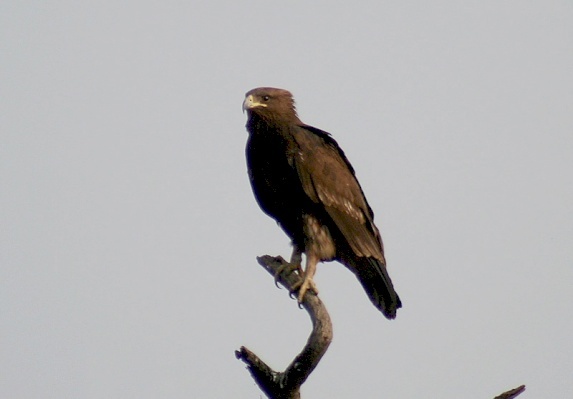 The Greater spotted Eagle is a medium size Eagle that prefers wetland and forested marshes in summer, and fields and wetlands in winter.

The Greater spotted Eagle is uniform dark "chocolate" brown. Its coverts are darker or uniform with its remiges giving the wing a dark appearance. The bill is heavy and strong and has yellow cere. The young is spotted white on the back, giving it its name. The Greater spotted Eagle has a short tail, relatively short hands (outer part of the wing) and a big head.

The Greater spotted Eagle inhabits wooded wetlands from Poland in the west to the Baltics, Russia and Western Asia. Its population is estimated at less than 10000 individuals. 1000 pairs breed in Eastern Europe, 3000 pairs in Russia and the rest 1000 pairs in Asia. Winter is spent in the Middle East, South East Africa and South East Asia.

The Greater spotted Eagle was badly heart in our area from secondary poisoning of rodents in the fields. In the last few years the Palestine Wildlife Society is running a biological pest control program using Barn Owls instead of poisonous pesticides. The sharp reduction in the amount of poisons in the fields helped to improve dramatically the survival of the Eagles in Palestine. In Europe, a main risk for its population is related to habitat loss and degradation, but the most severe risk in the last few years comes from "genetic pollution" created by interbreeding of Greater spotted Eagles with the more common and widespread Lesser spotted Eagle. It is now estimated that in Europe about 50% of the breeding pairs are mixed and in the near future, very few true Greater spotted Eagle will remain in the continent.

The main food of the Eagle is rodents and medium size birds but it is also known to feed on amphibians and large insects.