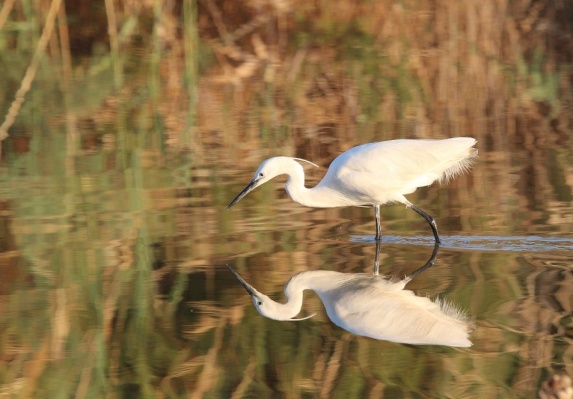 Description: Medium sized heron, completely white. Narrow and long proportion. The beak is thin and long. Black legs and yellow feet. The eye bridge is yellow - green, reddish during the breeding season. During courtship adult birds develop two feather plumes on their back. When in flight, wings are relatively long positioned in the middle of the body, with the feet projecting beyond the tip of the tail.

Distribution in the country and worldwide, The population of Eastern Europe and the middle east is around 45-75,000 birds and is stable (Wetlands International 2012). Although some birds are resident all year round, the population of Europe and western Asia migrate to south Europe, Middle East and east Africa.

In Palestine there is a stable resident population which is increased by additional birds moving through on migration and birds arriving to spend the winter. They nest in colonies on trees, many times inside villages.

Habitat: Found around any shallow water bodies; pools, beaches, inland lakes, reservoirs and large flooded winter pools. Breeding/mating (season, how and where): Little Egrets nest in large noisy colonies, often with other species such as Great White Egret and Glossy Ibis. Their nest is made of twigs and branches, built in trees and bushes. Although their range is increasing north-west they breed in southern Europe, south Asia, Africa and Australia.

Threats and hazards: The little egret population is always under threat from the drying up of water bodies. Destruction of their habitats is an ongoing problem as is the use of pesticides in agriculture leaching into water sources. Little Egrets could also be effected by outbreaks of avian influenza. Nets that stretch over agricultural ponds to catch fish can entangle Little Egrets which cause them to dehydrate and starve.

Similar species not to be confuse with: White morph Western Reef Egret will cause the most confusion as it the same size but has a yellow bill, decurved towards the tip and is very rarely found inland. Great white egret (Ardea alba) is much larger with a yellow thicker bill. Cattle Egret is a smaller bird with yellow thicker bill and yellowish highlights to the plumage.

Cool facts: In the 17th-19th century the courtship plume feathers of the Little Egret were used a lot in the fashion industry embellishing head dresses and clothing. The dangerous decline due to this lead the RSPB (Royal Society for the Protection of Birds) to protect little egret from 1889. It has been a rare bird in Britain since the 1600’s but its number are now increasing. In 1996 the little egret started to breed again in England, followed by Ireland in 1997 and Wales in 2002. When hunting for fish, the little egret will regularly shake its yellow feet under the water to scare fish out of hiding.