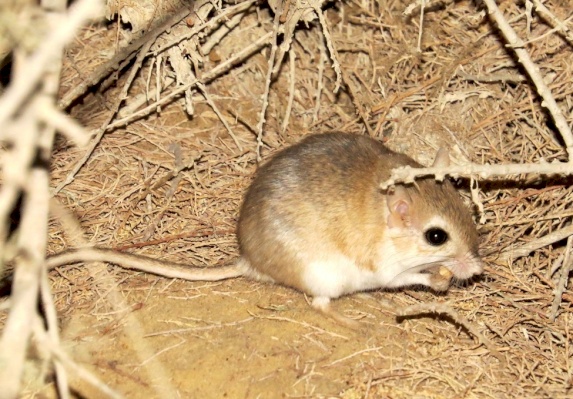 Systematic (order, family) – Rodentia, Muridae Description – A medium-sized gerbil with sandy-brown or dark brown upperparts and white underparts and feet. As in all gerbils, the tail is longer than the body. It is black on the upper surface and white on the ventral surface and has a “brush” of hairs extending from the midpoint to the tip. Distribution in the country and worldwide – Distributed in the Middle East and the Arabian Peninsula. It is the most common gerbil in Palestine. Conservation status – Least concern Habitat – Live in burrows that it digs or uses natural rock crevices. Occur in a variety of arid habitats including desert, semi-desert, and in rocky areas in hill country. They prefer sandstone areas and sand patches among rocks (not pure-sand areas) near vegetated wadis or in salt flats. Behavior – Solitary and territorial. The home range is of about 6-11 meters for males and less for females. They are nocturnal, with developed sight and hearing, being most active 2 hours after dark and again two hours before sunrise. They feed mostly on seeds and grains, but will also eat succulent plant parts and occasionally small invertebrates. They do not drink water, but instead obtain all the moisture they need from their food. They typically store seeds and snails in the burrow. Breeding/mating (season, how and where) – Breeding typically occurs from February to July, but can occur year round. Males and females only meet for courtship and mating, after which the male leaves the female to raise the young alone. Females gives birth in a padded nest in their burrow, and can produce up to three litters a year, each containing 3-9 blind, hairless young. The young open their eyes at 16 days and are weaned after 32 days. They leave the mothers burrows when almost fully grown. They can live for two and a half years in the wild or up to six years in captivity. Weight and size – Body length of about 9cm. Tail length of about 12cm. Weight: 16–35g. Threats and hazards – Habitat distruction. Cool facts – Their toes are long in order to reduce the contact with the warm ground and avoid water loss.