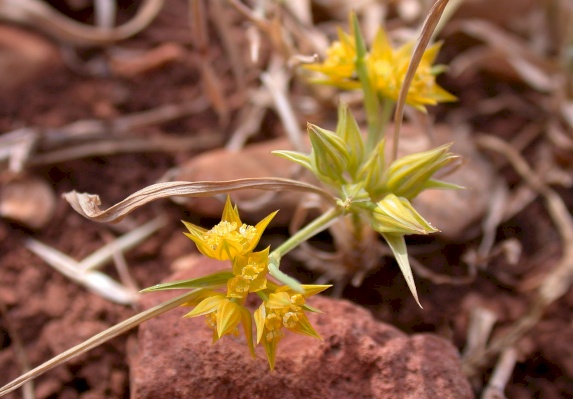 Bupleurum nodiflorum Bupleurum is a genus from the family Apiaceae, comprising circa of 150 species, distributed in temperate regions in the northern hemisphere, with some species restrict to some other areas.

Bupleurum nodiflorum is an annual herbaceous species with dichotomous stems. Inflorescences are aggregate in terminal umbels, containing very small yellow flowers. The umbel inflorescence is the characteristic that determines the family Apiaceae. The flowers are hermaphrodite and pentamerous, with five petals, five sepals and five stamens. The leaves are simple, alternate and with entire margins. The flowering period ranges from March to May.

This plant species cannot tolerate high salt concentrations in the soil. In general the plants of the genus Bupleurum are used for medical purposes in popular medicine, for example, against respiratory infections. Nevertheless, this use was not well scientifically explored and proved so far.