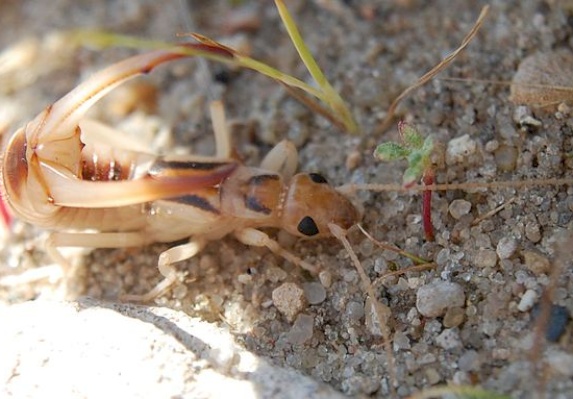 This is one insect species from the order Dermaptera, family Labiduridae and commonly known as striped earwig, due to two black longitudinal stripes on the beginning of the thorax (pronotum). In addition, striped earwigs have a typical forceps in the end of the abdomen. Labidura riparia is a cosmopolitan species, distributed worldwide in tropical and subtropical regions (except in Central America and Australia), on beaches and riverbanks, preferring sandy substrates. Earwigs can live in a variety of niches, but prefer dark and moist places where they can hide from the daylight, occupying abandoned nests or holes of other species.

Their body size varies from 16 up to 40 mm long, with differences in the forceps sizes between females and males. The forceps are used for predation, defense and courting, sexual selection and mating processes. Males have much larger forceps with stronger curves compared to females. As a nocturnal and carnivorous species, L. riparia hunts after the sunset and is a generalist predator, whose diet consists entirely of insects or scavenged meat. They may prefer butterflies larvae and insects eggs, but usually feed on any insect available. Because of this flexibility on eating habits, earwigs can easily adapt to new environment. However, in a stress condition of lack of food, they may eat eggs and nymphs of their own species. Females, in turn, can stay long periods without eating, during the preparation for laying eggs. Additionally, they show parental care by cleaning each laid egg and removing any fungi or dirt, from all the up to 100 eggs in a nest. After six instars till mature age, adults live for only 2–3 months and begin mating immediately. They have two to three generations in a year and the last generation hibernates underground in winter.

Very interesting and unique in these insects is the fact that males of L. riparia have two penises, but use predominantly the right penis for insemination, although both are functional. This suggests that L. riparia may have retained right-handedness in penis use, leading to the loss of the less frequently used left penis, characteristic shown in their relative taxa. The few individuals reported using the left penis for insemination showed anatomical deformity on the right penis. This “preference” may have a relation with the location of the spermatheca on females.

Striped earwigs have glands that secrete a rotting smelling pheromone to repel predators. Ants are their primary predator, preying on unattended L.riparia eggs.