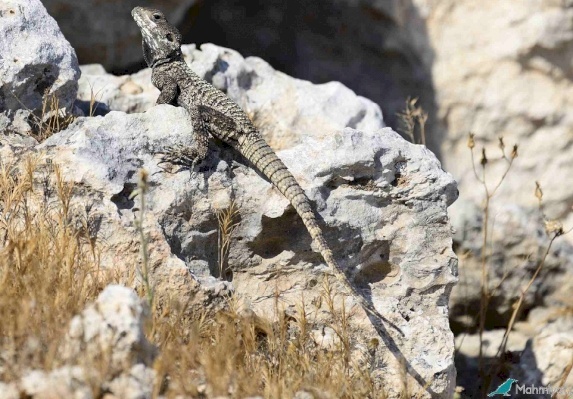 The Rough-tailed Rock Agama belongs to the Agamidae family in the Sauria (lizards) sub-order of the order Squamata (scaled reptiles). It is the most common agamid lizard species present in Palestine, reaching a maximum total length (body + tail) of 34 cm. The Rough-tailed Rock Agama (or Hardun) is probably the best known and most common of all reptiles in Palestine, and is seen in all natural and manmade habitats, including human dwellings. It is well camouflaged, usually matching the background of its natural surroundings. There is great variation in size and coloration between the larger, darker males, and the smaller, lighter colored females. Adult males are also very prominent in their position, easier spotted, as they must defend their territory against potential invading males. The young present a distinct dark band on the back of their necks, this is considered an adaptation to "break" the form of the lizard into two seemingly separate units (in the eyes of predators). The diet of the Hardun consists of invertebrates, mainly insects. It is oviparous (the young hatch from eggs), hatchlings usually appear during late summer and early autumn. The Hardun is very beneficial to man, as it devours huge amounts of pest insects. Many folk tales exist with regards to the Hardun, due to its tendency to live close to humans, and also due to the head-bobbing behavior of territorial males. The Rough-tailed Rock Agama inhabits most of the Middle East.