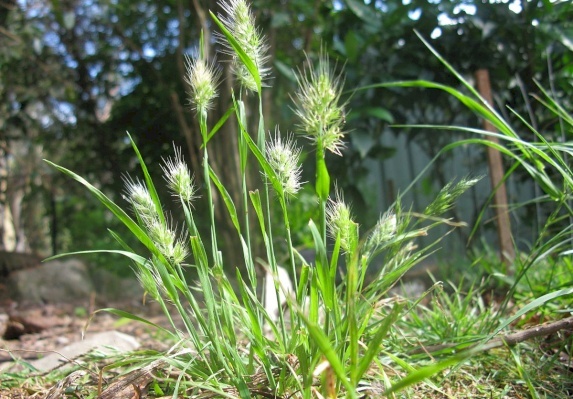 This plant species is an annual grass from the botanical family Poaceae. Its common English name is hedgehog dogtail or bristly dogstail.

Cynosurus echinatus is native to southern Europe, but it has been introduced in western Asia and widely naturalised further north in Europe.

It is also distributed in Australia, North and South Africa and in the Americas as an introduced plant species and may be considered as a weed in some localities. This plant is found in disturbed areas such as clearings and roadsides, in the Mediterranean woodlands and shrub lands. This species is, however, not much common in Palestine and wider area.
The hedgehog dogtail is a hairless plant with erect stem hollows 20 to 50 cm tall and fibrous roots. The leaves are alternate, entire, with smooth margins and with one leaf per node.

This species forms inflorescences with green hermaphrodite small flowers that consist of rounded or oval cluster or series of clusters of spikelets (a grass flower is formed by several basic units called spikelets, which consists of two outer bracts at the base and one or more florets above).

The fertile spikelet has an awn (a stiff bristle, growing from the ear or flower of many grasses) up to one cm long. The awns grouped together into a tuft give the inflorescence its hairy appearance. Fertile and sterile spikelets are paired and the flowering time is from March to June. Hedgehog dogtail produces large numbers of seeds that persist in the seed bank.
Interestingly, an herbicide-resistant strain of C. echinatus can be found as a pest in canola and wheat fields in Chile, for example. Thus, non-native grasses can compete aggressively for light and water affecting the amount and quality of litter, changing nutrient cycling and altering the composition of soil biota.

In spite of that, hedgehog has been also grown as an ornamental grass for drying. There are no known traditional or medical uses for this plant.