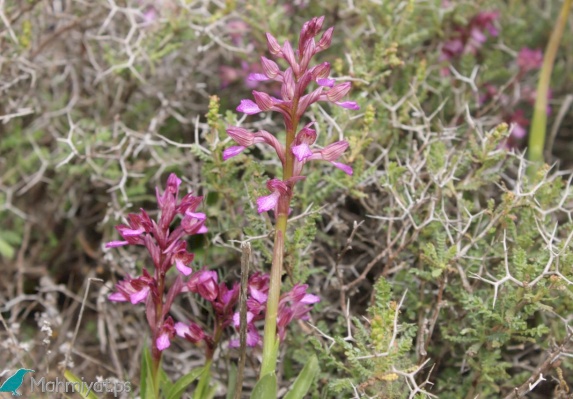 The Pink Butterfly Orchid plant is a geophytes plant belongs to the Orchidaceae family. The Orchidaceae are a diverse and widespread family of flowering plants, with blooms that are often colorful and often fragrant, commonly known as the orchid family. Orchids are easily distinguished from other plants, as they share some very evident, shared derived characteristics. Like most monocots, orchids generally have simple leaves with parallel veins. They are likely the largest family of flowering plants.

Orchid flowers are special because they grow upside down. A long upper petal grows on the bottom of the flower. This makes a good landing spot for pollinators. The common name of Butterfly Orchid reflects the showy and colorful form of the flowers. Orchis papilionacea is variable in size growing to between 15-40cm tall. It has 3-9 basal leaves and a further 2-5 smaller leaves clasping the upper stem. Leaves are alternate, rosette, entire. Stem bears between 5-15 large pink flowers. The sepals and petals form a loose, darkly-veined hood over the broad fan-shaped lip of the flower. The lip is pale pink and has dark pink stripes emanating from the centre, inflorescence is a lax spike, flowers are hermaphrodites.

Most orchids deliver pollen in a single mass. Each time pollination succeeds, thousands of ovules can be fertilized. The ovary typically develops into a capsule that is dehiscent by three or six longitudinal slits, while remaining closed at both ends. The seeds are generally almost microscopic and very numerous, in some species over a million per capsule. After ripening, they blow off like dust particles or spores. They lack endosperm and must enter symbiotic relationships with various fungi that provide them the necessary nutrients to germinate, so all orchid species are myco-heterotrophic during germination and reliant upon fungi to complete their lifecycles

Ecology: This plant grows in limestone habitats where it grows on scrubland and open grassy places, Orchids live in nearly all ecosystems around the world except glaciers, true desert and open water, although tropical areas especially in Asia, Africa and the Americas are the hot spots of diversity. Most grow as epiphytes on other plants, rocks or static objects for support and derive their nutrients and water from the atmosphere and debris, however many species grow in the ground in forest or grassland areas. Some are parasites, it follows the Mediterranean Chorotype.

Common and Medical Uses: The underground tubers of terrestrial orchids are ground to a powder and used for cooking, such as in the hot beverage salep or in the Turkish frozen treat dondurma. The name salep has been come from the Arabic folklore. Orchids have been used in traditional medicine in an effort to treat many diseases. They have been used as a source of herbal remedies in China since 2800 BC. The use for dried orchids ranges from immune system build-up, to cancer treatment, eye-sight improvement, regaining strength after healing and quick recovery after sex.The parts of the orchids used most frequently are the stems and bulbs, as they are designed to keep the plant alive during dry season, and hence are rich in nutritive substances.