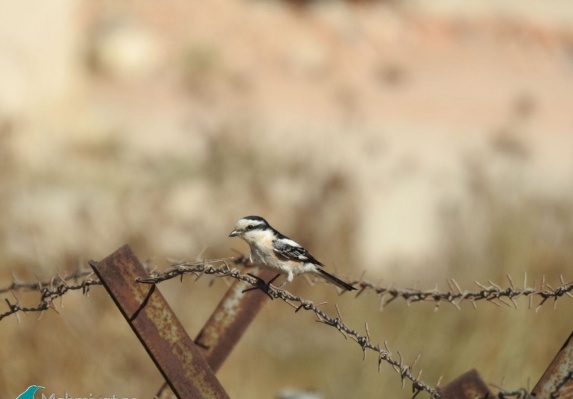 The Masked Shrike belongs to the Laniidae (Shrikes) family in the Passeriformes order.

The Masked Shrike is the smallest shrike in the area. It has a distinctive shape with short rounded wings and a short tail. The head is a combination of black eye stripe and cap and white eyebrow, forehead and throat. The back is dark – black in males and grey in females and has 2 white patches on the shoulders. The tail is black with white outer tail feathers and the wing has large white patches on the primaries. The flanks are peachy orange. Legs and bill are black and strong. The young bird has a spectacled pattern of grey instead of the black in adults but it moults its feathers and looks like an adult right after the winter in Africa.

Distribution: Found in southeastern Europe and the Middle East, from Greece to the Persian Gulf. Migrate south to winter in northeastern Africa and the Arabian Peninsula. In Palestine the Masked Shrike is a common migrant in all vegetated areas and a scarce breeder in open landscapes with trees in the West Bank. Very rare in winter.

Behavior: Shrikes are major predators of large insects, arthropods, lizards, mice, and small songbirds. They typically stick prey on thorny branches or barbed wire to both save energy and store the prey to eat later. They usually hunt from less exposed perches than other shrikes.

Breeding: The Shrikes nest is a bowl shaped nest built in a low tree by both adults. The female lays a clutch of 4–6 eggs, incubated by the female for 14–16 days until hatching. The chicks are fed by both parents until they are ready to fledge 18–20 days later, and remain dependent on the parents for about 3–4 more weeks.

Dangers and threats: Hunting of song birds by lime sticks and mist nets in south east Mediterranean and north Sinai is a major risk to this species.

Similar species not to confuse with: The Red backed Shrike has a brown back and is larger. The Pied Flycatcher has similar coloring but lacks the orange flanks and heavy bill.

Cool facts : The Masked Shrike is a highly territorial bird that even keeps a territory on stopover sites during migration. The impaling of prey behavior limits their distribution range to habitats with thorny trees and bushes but I can do also with barbed wire fences.