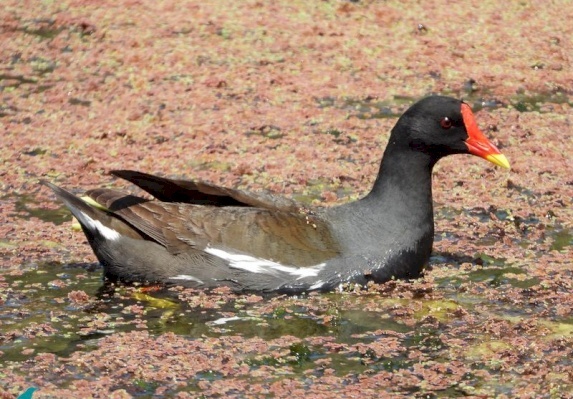 Description: The moorhen is a medium-sized waterbird that can be found feeding amongst reeds and vegetation radon the edges of water bodies.

Distribution in the country and worldwide: Breeding occurs across Europe, Central Asia and large parts of Africa and America. In Palestine it is a common winterer around marsh and water habitats and a rare breeder. On migration can occur almost everywhere.

Habitat: Found around most water bodies where there is dense vegetation cover. Rivers, streams, reservoirs, lakes, swamps, ponds and pools are favorited. Identification (how does it look like): A pigeon-sized bird that looks mostly black, but in good light reveals dark blue-grey body with brownish tinged back. It has a white line down side of body with white edges to tail that form an inverted V when viewed from behind. Bill is red with a yellow tip. Legs and toes are long and green-yellow.

Behaviour: Can often be seen flicking its tail revealing the white when feeding. A very vocal bird that will often be heard more than seen.

Breeding/mating (season, how and where): Nest is built of twigs and branches and usually in dense vegetation. Nesting population is estimated at 1000-2000 individuals (Shirihai, 1996).

Threats and hazards: Their biggest threat is through predation from invasive species such as the domestic cat. Nets over fish ponds can also lead to fatalities.

Similar species not to be confuse with: Coot is a more bulky bigger bird with a white beak.

Cool facts: Although its rare to see a Moorhen flying large distances (they are more likely observed running along the water surface), some populations in Siberia will migrate 2000km to reach wintering grounds.