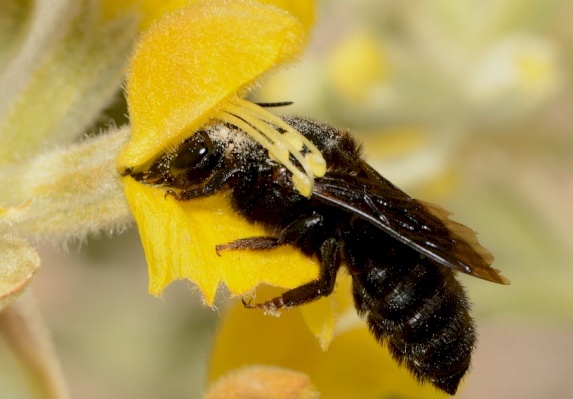 Megachile parietina is a solitary bee species, popularly known as black mortar bee. This name is due to the fact that females are black and construct their nest out of dried mud in stone hollows, rock sides or walls, using saliva and small stones. M. parietina is widespread throughout Mediterranean. Despite in the last century this species used to be largely distributed in Central Europe, there have been a markedly reduction on its population sizes. However, rare small remaining populations are still found in Alpine regions of Slovenia and in in other regions in Central Europe (like Germany, Switzerland and France).

Megachile parietina belongs to the family Megachilidae. A distinctive characteristic of this family is the belly brush (ventral scopa) beneath the female’s abdomen. The belly brush is a structure that only female bees of this family have (except the parasitic species) and it is formed with many dense hairs, used for collecting pollen. Females of other families of bees have either scopa on their last pair of legs and or on the sides of their thorax, or even a pollen plate on the last pair of legs.

The black mortar bee is very hairy, has medium body size, with males measuring 14-17 mm and females 16-18 mm. Females and males differ in their body colours: females are black and the wings are dark brown, but it can reflect dark blue shinning in light. Their belly brush is densely black haired, but reddish in the middle. Males are covered with brown/yellow hairs on their head, thorax and front part of the abdomen (front tergites) and black hairs on the back side of the abdomen (posterior tergites).

As a solitary bee species, M. parietina female builds its own single nest on rocks or house walls, each nest containing five to ten brood cells (in rare cases with 20 brood cells). For each brood cell the female first provides pollen and nectar as food resources for the egg-larva development, and then it lays an egg. Females alone construct and protect their nest. Males do not participate on nesting construction, provision and protection: their role is in the mating period. Sometimes small agglomerations of nests (up to 30) can be found. In addition, old nests can be used again, but before that, the new nest owner will clean it up, removing all excrement, rest of cocoons and of pollen. Furthermore, the black mortar bee is univoltine, that means each generation lays eggs only once in a year. Females live for six to eight weeks and fly between April and June.

Megachile parietina is a polylectic bee species, visiting many plants, especially plants of the families Lamiaceae, Fabaceae and Boraginaceae. The pollen amount needed for each larva is high, so that a wide range of plant species of these families are required for foraging. Recent studies show a strong decrease of M. parietina populations, mainly in France, where in past times it used to be very common. The studies agreed that bee species associated with leguminous plants (for example, Fabaceae) seem to be at highest risk of extinction.

Among the parasites of M. parietina is the bee Stelis nasuta, which lays three to six eggs in the brood cell of the host, while the host is still foraging for providing the brood cells with resources, before sealing it with soil and small stones. The larvae of this parasite feed on the host food, so the host larva starves. Since S. nasuta is so specialized in parasitizing M. parietina, these parasite populations have also become extremely rare in Central Europe, following the disappearance of its host. Other parasites commonly attacking black mortar bee are Dioxys tridentata, D. cincta and Chrysura radian.