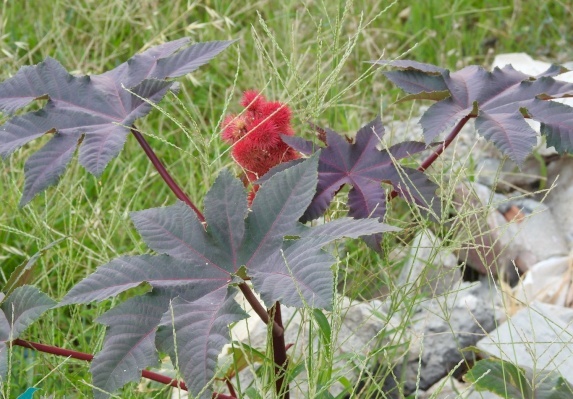 Castor beans is considered as the only member of the genus Ricinus. It belongs to Family Euphorbiaceae. It is native to tropical east Africa around Ethiopia. It is mostly found in humid, well-drained soils in disturbed areas. It is an evergreen herbaceous or semi-woody large shrub or small tree. The leaves are lobed simple, alternate on the stem, star-shaped on long petioles. It has silky green leaves. Flowers are produced in dense inflorescences tall at the tops of the stems. Flowering periods March, April, May, June, July, August, September, October, November. The fruits are pods: Ball-shaped capsule around covered with soft green or red spines.

The plant is growing in groves and waste places, disturbed sites, river bed, sand banks, in flood outs related with streams and along roadsides. The plant prefers semi-arid and arid soils with poor water retention ability.

The seeds are poisonous where four seeds can kill an average-sized adult and ingestion of minor amounts will result in vomiting, severe abdominal pain, diarrhea, and convulsions. Livestock and poultry can also be affected by this toxicity. The active principle ricin has been investigated as an anti-cancer agent. Castor oil can be consumed and has been used medicinally as a remedy for everything from constipation to heartburn. It is an effective purifying or purgative and can be used locally as an emollient for dry skin. Poultice of castor leaves is beneficial as an external application to boils and swellings. Castor oil massaged over the breast after child-birth increases the flow of milk, as it stimulates the mammary glands. If used regularly as hair oil, it helps the growth of the hair.