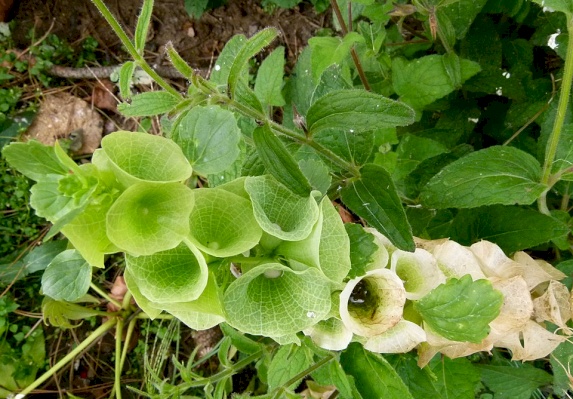 The genus name Moluccella is in reference to the Moluccca Islands of Indonesia where this plant was once thought to be native. Moluccella laevis grows in Mediterranean shrub and woodlands, as well as semi-steppe shrublands habitats.

Moluccella laevis has erect stems, branching habit, reaching up to 1 m high and spreading up to 30 cm. The flowers are grouped in spike inflorescences, with several showy fragrant flowers. However, the flowers are tiny and white, whilst the showy part is formed by a green cup-shaped calyces surrounding each flower. The rounded leaves are pale green, opposite, with entire, dentate or serrate margins.

The flowering time of M. laevis is from April to July, producing a good amount of nectar and attracting several bees. The fruits are nutlets. Bells of Ireland is a self-seeding plant that prefers full sun and regular water. Furthermore, the blooming stems of M. laevis can be used for fresh cut or dried flower arrangements. If the blooming stems are dried, they will add structure and support to longer-lasting arrangements.