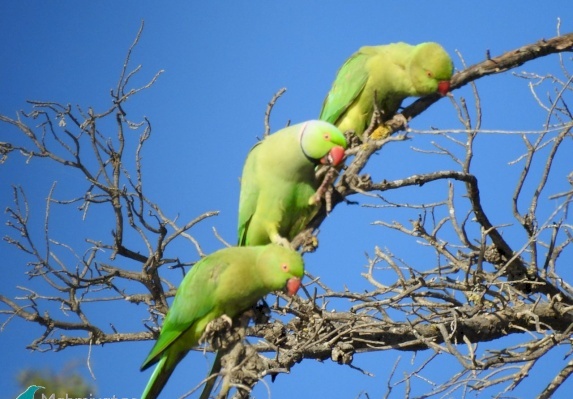 It is called the Indian parrot or the round neck. It is a medium-sized bird native to Africa and the Indian subcontinent, and it is now being introduced to several parts of the world as a pet bird. One of the few parrots that have successfully amended to disturbed environmental habitats, they have adapted to urbanization and deforestation.

These birds live in a variety of climates outside their native habitat, also able to survive the low winter temperatures of northern Europe. This species is listed as Least Concern by the International Union for Conservation of Nature.

The adult male has a red and black neck ring, and immature birds of both sexes do not show neck rings or show faint to dark gray shade-like neck rings. No, both sexes have a distinct green color in the wild, and captive-bred ringlets have multiple colour variations that include turquoise, cinnamon, olive, white, blue, violet, gray, and yellow.

The average length of pink-ringed parrots is 40 cm, with an average wing length of about 15 to 17.5 cm. Pink-ringed parrots typically feed on buds, fruits, vegetables, nuts, berries, and seeds. Wild flocks also fly many miles to feed in farmlands and orchards, causing extensive damage. Wild parrots regularly visit gardens and other locations close to human habitation. , and take food from bird feeders. In India, they feed on grains, and in winter also on peas. In Egypt during the spring they feed on berries and in summer they feed on dates and they nest inside Palm trees.

Habitat: a variety of forests, grasses, and herbs.

Always attracts attention with its continuous breeding screeching: Pink ringed macaws form pairs from September to December. They generally live in a hollow trees. 1-12 white eggs are laid by the female and incubated for 17-35 days. The young remain in the nest for 21-70 days.

In Palestine: This is an invasive species , it can learn to talk ! and it eats mostly fruits, sunflowers and corn!