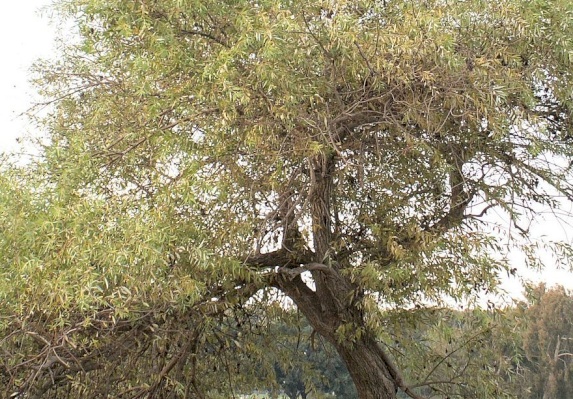 A deciduous tree of the Salicaceae family that can grow to a height of eight meters (but usually grows to five meters) found on the banks of streams. The tree grows fast and has a wide canopy, and is therefore a good shade tree. Its branches are of a reddish color and although flexible, vegetative reproduction from broken branches that stick in the mud is common.

The leaves are lanceolate, entire and alternating. The upper side of the leaves is shiny and the lower side has a bluish tinge. The lack of hairs on the stem or leaves .distinguishes it from similar members of this family.

The flowers bloom as the leaves begin to sprout. The flowers have no calyx and grow from among bracts as a catkin with a length of 2-3 cm. The male flower has 4 anthers and the female has two styles. At the base of the female flowers is a nectary which attracts the insects for pollination. The superior ovary with one compartment forms a capsule with two valves containing small seeds with tufts of hairs.

Flowering period: It flowers from February to April.

Ecology: It is found on the banks of streams and in humid habitats in Mediterranean as well as on streams and water constant water sources in desert habitats. During spring, the Willow is a good shelter and food source for many migratory warblers and nightingales, especially from the Iduna genus. The Common Nightingale is known to breed in vicinity to Willows in the northern Jordan valley.

Common and medicinal uses: The bark is used in the extraction of tannins and is a folk medicine for the relief of pain, and treatment of fevers and infection. The active ingredient of aspirin was isolated from the bark.

Distribution in Palestine: It is found in all habitats with running water –  the eastern slopes, northern Jordan valley and along the Dead Sea springs.