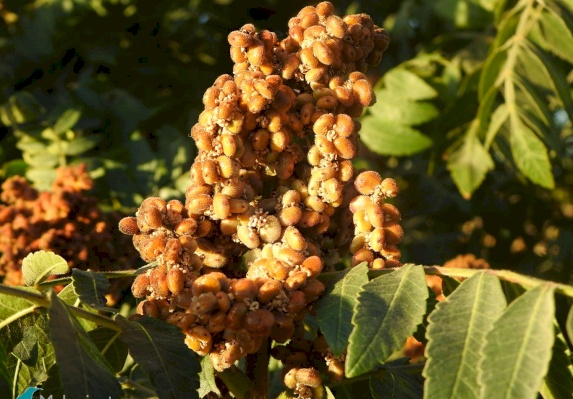 The sumac is a short deciduous tree or bush of the Anacardiaceae family that can grow to a height of 1-4 meters. Its beautiful pink-red autumn foliage enhances the woods of the Mediterranean basin as well as the Middle East. It is unclear where it grows as part of the natural vegetation and where it has been introduced, as it is grown commercially for its high quality tannins, used in the tanning of leather. As it reproduces vegetatively through rhizomes, it is usually found in groups.

Its small greenish flower with its 4-6 petals and sepals grow in dense clusters. Both the male flower, with five stamens, and the female flower, with three pistils, are found on the same tree.

The compound leaves have 3-7 pairs of soft, hairy, pinnate leaflets with saw-toothed margins. The tip of the leaf has an additional singular leaflet.

Flowering period: The sumac flowers from April to June, and often from October to November as well. The dense clusters of flowers turn into clusters of small brownish red, lentil-shaped drupes. The seeds are dispersed by birds and other animals.

The fruit is covered in short glandular hairs secreting a sour tasty substance that make it a useful seasoning. The fruit ripen in the summer and are collected from June to November.

Ecology: It is found in areas of the mountainous Mediterranean wood. It often grows near villages, where it appears to be cultured.

Common and medicinal uses: The fruit are ground for use as a seasoning and soaked in water to provide a refreshing drink. The bark and roots were used to provide coloring for fabrics. The dried powdered leaves, rich in tannins, are mixed with water to provide a leather tanning solution.

It is known as a home treatment for stomach pain, gum infection, liver and spleen disease and well as blood clotting and urinary bladder infection. Research has found it effective in preventing cardiovascular disease in diabetes 2 patients. Sumac extract has been reported to be antifibrogenic, antifungal, anti-inflammatory, antimalarial, antimicrobial, antimutagenic, antioxidant, antithrombin, antitumorigenic, antiviral, cytotoxic, hypoglycemic, and leukopenic.

Distribution in Palestine: It can be found in the upper Jordan Valley, and the mountains of the West bank.