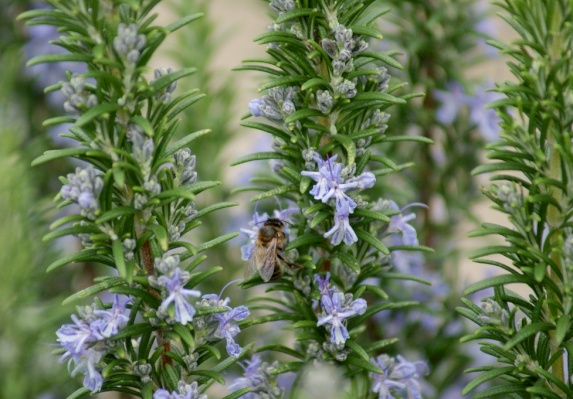 Rosemary is an evergreen perennial shrub belongs to the Lamiaceae family (Minit family), it is native to the Mediterranean region and Caucasus. It has needle-like leaves, entire margin, and simple. The flowers are purplish white, Pale blue or lilac corolla and resemble the Salvia flowers that both have only two stamens (male organs of the flower, containing pollen), whereas in the mint family the usual number of stamens is four. The flowers are grouped in little axillary and terminal clusters with bracts and bell shaped calyx.

Ecology: The plant grows in habitats like dry scrub land in the Mediterranean region, Phrygana, ,but widely cultivated. It is found in various bioclimates (from the sub-humid to the upper arid) but is dominant in the semi-arid Mediterranean bioclimatic stage. Rosemary likes sun, the more the better, and dry well-drained poor soil. It does not like moisture laden areas of the gardens, it follows the Mediterranean Chorotype.

Medicinal Uses: In the past, rosemary was believed to aid memory and was often made into garlands for students when they were sitting their exams. Scientific research has shown that rosmarinic acid, one of the main constituents of rosemary has strong anti-oxidant properties. The leaves and flowers are the used parts and can be used to make a tea, said to be good for headaches, colic, colds and nervous diseases as well as depression. Rosemary has also been used in herbal remedies for relieving asthma. The essential oil of rosemary improves hair growth in people with allopecia. It also has antibacterial and antifungal properties. There is evidence that the essential oil relaxes the muscles of the gastrointestinal tract, and may increase blood flow to the heart. The essential oil of rosemary is part of many antiseptic and antibacterial medicines for the respiratory passages. Taken by mouth, a rosemary tisane is given for flatulence, bloating and mild spasms of the gastro-intestinal and biliary tracts. Externally, rosemary preparations are incorporated in mixtures used in the supplementary treatment of rheumatism of the joints and muscular pain.

- The name of Rosemary originates from the Latin word rosmarinus, meaning “mist of the sea” or “dew of the sea”.

- Ancient Greeks believed that Rosemary was a magical plant that could strengthen memory, it is medicinal symbol of remembrance.

- Rosemary has been named Herb of The Year in 2000 by the International Herb Association.

- Distilled Rosemary oil can be poisonous in strong doses.

- Rosemary is quite difficult to grow from seeds.

- Rosemary can be easily propagated by cuttings.

– a pleasant surprise to any herb and vegetable gardeners.

Distributions in Palestine: Mediterranean Woodlands and Shrublands, and is cultivated everywhere in Palestine .