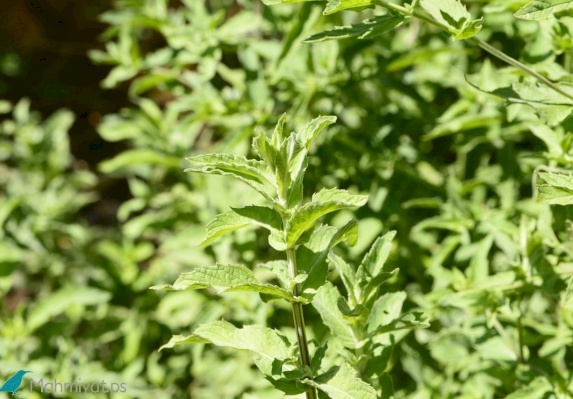 Mentha is a genus of plants in the family Lamiaceae (mint family). The exact distinction between species is still unclear. Hybridization between some of the species occur naturally. Many other hybrids, as well as numerous cultivars, are known. Mints are aromatic, almost exclusively perennial, rarely annual herbs.

They have wide-spreading underground and overground stolons and erect, square, and branched stems. These plants are among the easiest plants to propagate by stem cuttings.

The leaves are arranged in opposite pairs, from oblong to lanceolate, often downy, and with a serrated margin. Leaf colors range from dark green and gray-green to purple, blue, and sometimes pale yellow.

The flowers are white to purple, the flowers are bilaterally symmetrical with five united petals flowers provide bees a nectar source. The fruit is a nutlet, containing one to four seeds.

Ecology: Mentha genus are widely distributed and can be found in many environments, most grow best in wet environments and moist soils. Mints grow 10–120 cm tall and can spread over an indeterminate area. All mints prefer, and thrive, in cool, moist spots in partial shade. In general, mints tolerate a wide range of conditions, and can also be grown in full sun.

Common and Medical Uses: Mints are cultivated for an aromatic essential oil in the stems and leaves, which is used for flavoring, perfumes, and medicinal purposes, with fresh and dried leaves and extracts like menthol. It is also used for culinary, medicinal, and cosmetic purposes.

Peppermint (Mentha piperita) and spearmint (Mentha spicata) are two of the most important commercial species. The mints provide a unique flavor and aroma, which has delighted people for centuries.

Offering an aromatic, sweet flavor, with a cool after taste, they are used in both sweet and savory dishes, such as teas, beverages, jellies, candies, ice creams, and lamb dishes. Mint essential oil and menthol are an ingredient of such non-prescription products as flavorings in breath fresheners, antiseptic mouth rinses, toothpaste, and chewing gum, and menthol is used for such medicinal treatments as short-term relief of minor sore throat, an antipruritic to reduce itching, a topical analgesic to relieve minor aches and pains, and as a decongestant.

- The genus Mentha is believed to have originated in the Mediterranean basin.

- Mint leaves are used to ward off mosquitoes. It is also said that extracts from mint leaves have a particular mosquito-killing capability.

- Mint oil is used as an environmentally-friendly insecticide for its ability to kill some common pests like wasps, hornets, ants, and cockroaches.

- Found in the Egyptian tombs dating back to 1000 BC and has been part of the Chinese pharmacopoeia even longer.

- Peppermint is one of the oldest and best tasting home remedies for indigestion.

- The United States produces more than 70% of the world’s supply of peppermint and spearmint.