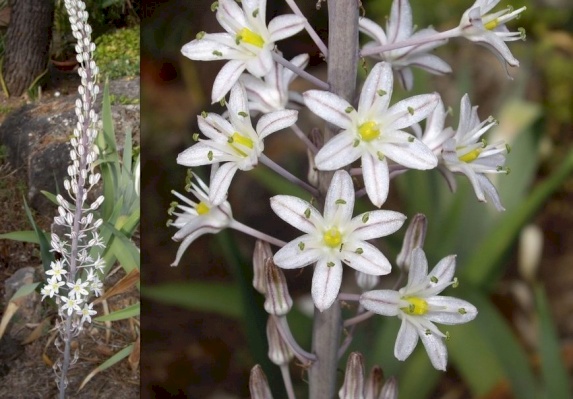 Drimia maritima is a geophyte species of flowering plant in the family Liliaceae, It is native to southern Europe, western Asia, and northern Africa. This plant grows from a large bulb which can be up to 20 cm wide and weigh 1 kg . Several bulbs may grow in a clump and are usually just beneath the surface of the soil. In the spring, each bulb produces a rosette of about ten leaves each up to a meter long. They are dark green in color and leathery in texture. The stem reaches up to 1.5 m height , the leaves are long-lanceolate and entire. The flowers are Perianth-segments free, oblong, white with a green or purple mid-vein; style equalling the stamens. The flowers are hermaphrodite (have both male and female organs) and it is pollinated by insects and wind. Insect pollinators include the western honey bee, the Oriental hornet, and the paper wasp species.

The fruit is Follicles open when ripe, each containing one smooth, polished, brown seed; pericarp of the seed is brown and wrinkled below.

Ecology: This plant often grows in rocky coastal habitat, especially in the Mediterranean Basin, where it is common. It occurs in many other types of habitat, except for the driest deserts. The plant can tolerates strong winds but not maritime exposure, it follows the Mediterranean botanical Chorotype. Maritime squill is very common in many areas of the Mediterranean and elsewhere, but it is vulnerable to coastal urbanization.