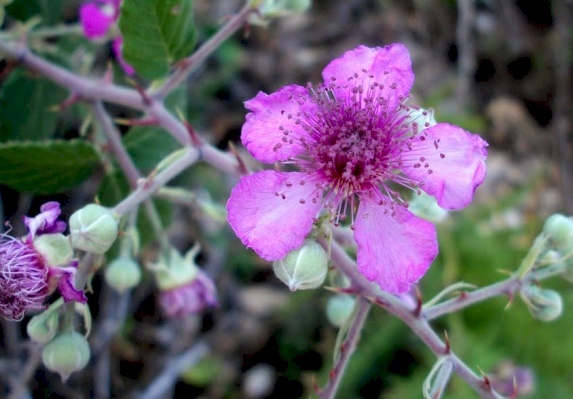 Rubus anatolicus is the scientific name that is synonym for the accepted scientific name Rubus sanctus and belongs to the botanical family Rosaceae. This perennial shrub species is commonly and largely known as Holy bramble, native to Western Asia and Mediterranean region, but is distributed in West, Central and South Europe, Southwest Asia, Western Himalayas, Egypt, besides also its native rage. In North America and in Galapagos the Holy bramble is an invasive plant that threats the local native plant species.

Rubus anatolicus growns up to two metres high and its flowering period is from May to September. The stems are branching, with hooked thorns, whilst the leaves are alternate, compound, pinnate or bipinnate, dentate or serrate and the underneath is very hairy. The light pink flowers have five petals, but they can also be white. The inflorescences are densely hairy, containing flowers with rounded and strongly wrinkled petals, with glabrous anthers. The branches and petioles are usually reddish. The fruits are commonly edible in the Mediterranean region.

Interestingly, an exemplar of the Holy bramble can be found at the Chapel of the Burning Bush on the Mount Sinai, where it is revered as the original burning bush of the Bible. Furthermore, the several species of the genus Rubus are well known for their pharmacological properties, such antioxidant, antitumor, and wound healing potential. The aerial parts of Rubus sanctus, for example, promote wound healing activity in animals.