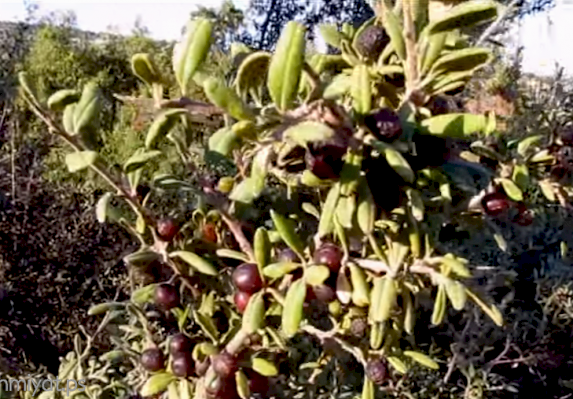 This shrub species is called in Europe as Black hawthorn or European buckthorn. In Mediterranean region this plant species is known as Palestine buckthorn. It belongs to the botanical family Rhamnaceae. Rhamnus lycioides is distributed in South Europe, North Africa and the Mediterranean region (ranging from woodlands and shrub lands to semi-steppe and montane vegetation).

The Palestine buckthorn is a perennial plant that grows up to three meters high, with thorny and tangled stems, which have several branches. The bark is grey; the leaves are entire, have light green colour and are small, up to three centimetres long. The Palestine buckthorn flowers from April to March. Its yellow/greenish flowers are very small and inconspicuous, solitary or in small groups in the axils of the leaves, with four triangular lobes. The calyx has four sharp corners. The petals are rudimentary or do not exist. The yellowish fruits are small measuring four to six millimetres long.

The plant can thrive in dry forests and bushes, but also solitary in degraded dry lands as a pioneer species, due to its resistance and resilience to drought and bad soil conditions. This is one of the last plant species to disappear in very dry areas, being extremely valuable to little birds, where they can feed on its juicy fruits and can use the plant as protection and for nesting. Individuals of the same population produce fruits in different timings, extending the availability of food resources for birds that, in turn, disperse their seeds. The fruits are bitter and in large amounts, toxic to humans.