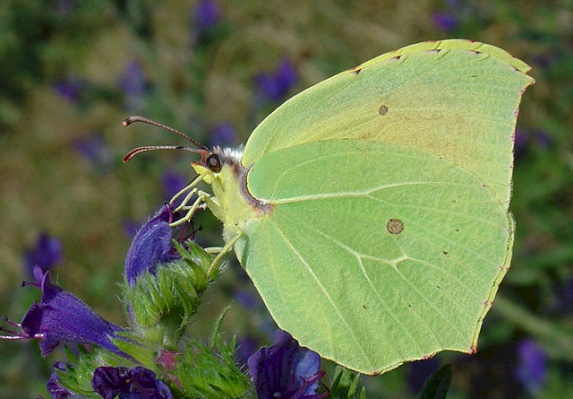 This medium-sized butterfly belongs to the family Pieridae, is native to the Mediterranean region and is found mostly to inhabit semi-arid regions in open woodlands and scrublands. It is also commonly seen in warm and dry rocky habitats.
Cleopatra butterfly is commonly found in the northern and central region of Palestine, where a sub-species has been recorded – C. cleopatra taurica
This species shows  a very clear sexual dimorphism (difference in physical appearance between male and female). In general the butterflies are yellow coloured with a hook like structure on the forewings and small brown spots in the centre of the wings on the upper-side. The females have pale yellow to greenish coloured wings, while the males have darker yellow coloured wings with an orange patch or mark on the upperside of the forewings. This bright orange patch on the forewings helps the males to be very quickly identified during flight. Sometimes the females are also seen to have pale yellow coloured spots on the underside of the forewings.
The females lay eggs only one time in a year and the eggs and the pupa  are pale green in colour while the larva are darker green in colour with a light coloured stripe along each side of the body.  When the larvae are ready to pass into the pupa stage, they tie themselves with a silk thread to the underside of a leaf on the hostplant. The pupa is green in colour in the intial stage and later turns to yellow and red, showing the colours of the wings of the adult form, which is ready to come out from the pupal case.
It is known to fly all round the year except in December. It is also a migratory species and the larvae feed on plants of Rhamnus  species.The adults are known to take rest in evergreen trees and shrubs.
This butterfly species is also a very interesting example of ‘mimicry’ - the green colour and shape of the wings and also the pattern or design of the veins on the underside of the wings makes them look like the leaves of a plant and thereby protects them from their enemies !!

Sightings: This butterfly species is native to the Mediterranean region and is found mostly to inhabit semi-arid regions in open woodlands and scrublands.This species is commonly found in the northern and central region of Palestine, where a sub-species has been recorded – C. cleopatra taurica