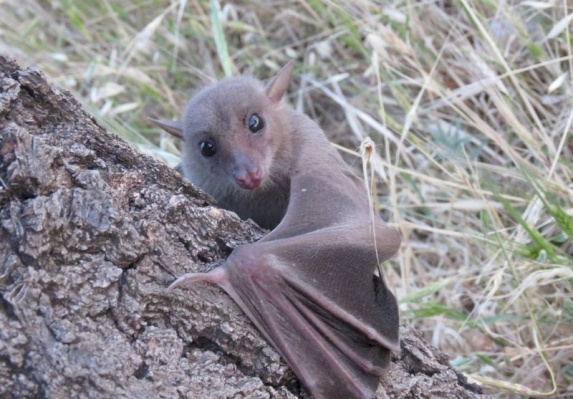 Description – The Egyptian Fruit Bat is the largest bat in Palestine, and the only representative of fruit bats in the area. The Egyptian Fruit Bat's body is covered with soft fur that is greyish brown to light brown. Its eyes are large and dark (with good night vision), and their snout is long and deep; as a result, they are sometimes called “flying foxes” due to the similarities between their faces and a fox's.

Distribution in the country and worldwide – The Egyptian Fruit Bat has a wide but patchy distribution across Africa and Asia. They can be found throughout the Mediterranean and Middle East, including all parts of Palestine.

Habitat – They can be found in both lowlands and the mountains, as long as suitable roosting sites and an adequate supply of fruit trees are available. They are extremely adaptable and can inhabit a variety of habitats, from arid to tropical areas. They are known to roosts in caves, but will also use man-made structures tunnels, deserted structures, and ruins.

Behavior – During the day they spend their time resting and sleeping at the roosting sites, in colonies often numbering over 1,000 members. At the night they fly out as far as 15km in search food in orchards, groves and settlements. They consume the juice of ripe fruits and nectar. They crush the fruit between their flattened teeth and swallow the juices, the pulp and seeds are then emitted. Unlike all other fruit bats, this species is able to use echolocation (sonar) by producing tongue clicks and then listening for the sounds to return. In addition, they produce various grunts and screeches used for social communication. As a result, their communal roosts are often very noisy and they are believed to be the most vocal of all bat species.

Breeding/mating (season, how and where) – The gestation period is about 115 days. Typically only a single offspring is born, but twins do occur. Calving occurs mainly in April and September, which suggests 2 breeding cycles a year. The mothers carry the baby for the first six weeks, while the baby clings with its teeth to its mother's nipple. Once they get too big, she will leave them in the roost when she goes out foraging, but they won’t be weaned until 3 months of age. At 6 months they reach full size, and can finally become fully independent. They live approximately 12 years in the wild and up to 20 years in captivity.

Weight and size – body length of approximately 16cm, with a large wing span of about 70cm. Average weight of 100g-130g but the males can reach up to 200g.

Threats and hazards – They are considered a pest by fruit farmers, despite the fact that only small amounts of their diet consists of commercially grown fruits and that commercial fruit is picked before it is ripe, so it is unattractive to bats. But, as a result cave roosts are often fumigated or destroyed, or the bats poisoned. Conflict with humans also arises when bat droppings accumulate on the walls of buildings. Other threats to this species include deforestation and pressure from increasing tourism to caves.

Cool facts – They drink water from open water bodies while flying and diving. They are born with a full set of teeth (34). As an adult, the teeth slowly erode and only the canine teeth will remain, and eventually they too can become eroded. Thus, through the teeth, one can distinguish between young, adult, and old bats.