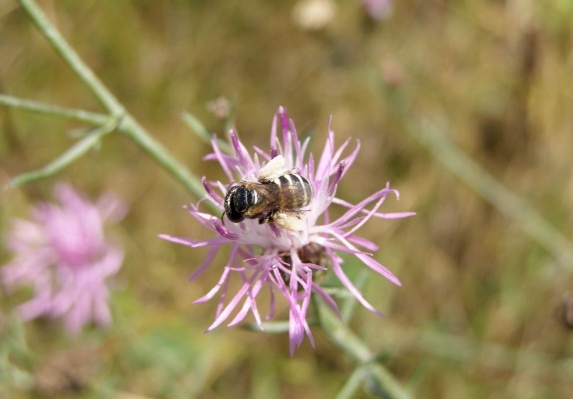 The genus Camptopoeum includes a total of just 30 species, from which seven are found in Palestine and wider area. Camptopoeum spp. are distributed in Middle East, Western Asia, Northern Africa, South and Eastern Europe and Mediterranean basin. Except for some parts of Middle East and of Western Asia, Camptopoeum species are considered rare and not much abundant. In some countries, such Germany, Greece, Hungary and Poland, only one species can be found.

Camptopoeum spp. are known as colourful bees due to their yellow and black strips on their abdomen, with yellow spots on their face and thorax (chest), and perceptible big and light compound eyes. The colourful bees have between 6-10 mm body sizes and are just slightly hairy. However, they may be confused with a similar in size, but more hairy and more robust bee called Colletes daviesanus, due to its obviously light hair strip on the abdomen. The colourful bees transport pollen clumps mixed with nectar on their scopa (a brush of hairs on the tibia of their last pair of legs) to their nest.

As solitary bees, a single female of a species of Camptopoeum builds up its own nest in the soil. Females construct mostly their nests with horizontal brood cells in small to large agglomerations, in flat sloping and almost bare ground. Males usually hatch earlier than females, because they are smaller in size, thus need less time for maturing, compared to females. Thereby, when females hatch next year, males are already flying around the nests waiting for mating. These bees have one generation per year (univoltine), flying from July to August. Most of the species are oligolectic, specialized on visiting a few plant species from the family Asteraceae. The parasite Pasites minutus is a bee species specialized in attacking nests of Camptopoeum spp.

List of species of the genus Camptopoeum distributed in Palestine and wider area.