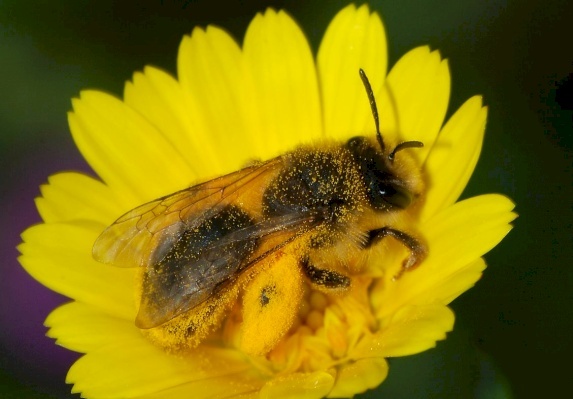 The genus Andrena includes an enormous number of species, with more than 1500 bee species worldwide, except in the Oceania and South America. In Palestine and wider area, 108 species of Andrena can be found. These bees are also known as mining bees, because several species of this genus are ground-nesting. Their flight activity varies among the species, but in temperate areas they can fly from March to September, although most of them fly during spring.

The body length of Andrena spp. ranges from small sizes (4-6 mm) to big sizes (15-16 mm) with males smaller and more slender than females. The females of Andrena can be readily distinguished from most of other small bee species, since they have velvety areas between the compound eyes and the antennal bases (facial foveae). In addition, they have very long scopal hairs on the trochanters (flocculus) and on the tibia (scopa) of their hind legs, for collecting pollen. The identification to species level is often very difficult and for male bees it is even worse. For females, the colour of the scopa, the shape of the upper part of the propodeum (back part of the thorax) and the shape of the foveae are the relevant characteristics for species determination, whilst for males, the shape of the head, length of the antenna and the genitalia are important.

Bee species belonging to Andrena genus are essentially solitary. A female alone digs a role in the soil with several nest chambers and closes the nest entrance on the ground surface. However, for some few species, a communal lifestyle can be observed, where some females (often sisters) share a nest, which is founded by one female. The main advantage of a communal nest is a better protection of the brood cells against parasitism and predators, because there is always at least one female guarding the nest. In temperate areas, when temperature ranges from about 20 °C to 30 °C, females and males of Andrena spp. hatch from the underground cells where their pupae overwinter. They mate and the females then search for their nest burrows. Finding the site for the future nest, each female will construct their own small cells containing a mix of pollen with nectar and will lay an egg, sealing then the brood cells afterwards. They lay one single egg in each brood cell. Andrena-species larvae do not construct a cocoon and usually prefer sandy soils as nesting substrate, under shrubs to be protected from heat and frost.

The most common parasites of Andrena-species are the bees of the genus Nomada and Sphecodes. Meloide beatles, Strepsiptera and Bombyliidae flies were also reported attacking their nests. List of species of the genus Andrena distributed in Palestine and wider area.

List of species of the genus Andrena distributed in Palestine and wider area.