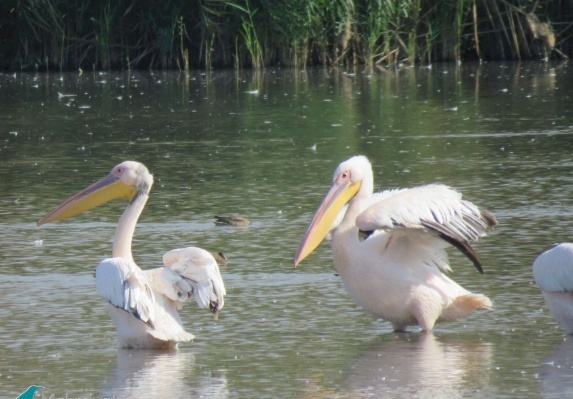 Description: One of the largest of bird of Europe and the Middle East. Its body shape is wide, heavy and round. It has short legs and webbed feet that are adapted for swimming. It has four toes but the webbing is stretched only between three. It has a long white neck and a massive straight long beak. Underneath the lower bill hangs a bag of yellow skin but this changes color to yellow grey when not breeding. The young is greyish brown, with darker feathers on the back and wing coverts.

Distribution in the country and worldwide: The Pelican nests in south-east Europe, south-west Asia and a large part of Africa. The European and Asian populations migrate and winters in Africa and south Asia. The African population is sedentary. The northern migrating population (about 50,000 pelicans) is declining (Mundkur & Szabolcs 2012), while the African sedentary population is stable. The world population is about 250-300,000 individuals. About 200,000 of these birds nest in Africa.

30-45,000 Pelicans move through Palestine each year on migration in September, October and Novembers. Up to 500 Pelicans remain for the winter in water reservoirs and can be seen mainly in the northern Jordan valley and Jenin area..

Habitat: Coastal swamps and inland lakes. Large pools and reservoirs. Migrant flocks can often be found resting in coastal waters and even fields.

Identification (how does it look like) A Very large white bird with a long head and a long bill. Almost pure white when wings are closed, in flight it has large black edges to the trailing edge. Juveniles can be separated from the adults by their brown grey wings and back. Adult males are bigger and heavier birds than the females with a longer bill.

Behaviour: The Pelicans are group fishers. They attack flocks of fish and scare them in to corners or shallow water and then dive together for the catch. While flying, Pelicans form flocks in an arch shape and use thermals to help them save energy carrying their heavy mass.

Breeding/mating (season, how and where): The European population nests in the Danube delta in Romania and Bulgaria in colonies. Threats and hazards Most, if not all of the population decline is caused by man-made interference. Hazards are a combination of destruction of wetlands and change of water courses for agricultural use, hunting, entanglement in fishing nets and collisions with overhead power cables. Fish containing poisonous heavy metals that are consumed by the pelicans also have an impact on their population.

Similar species not to be confuse with. In flight can be confused with the White Stork who is slenderer, has a long neck and legs and an orange bill.

Cool facts: Pelicans can cause severe damage to fish farms, especially is they are hungry during their migration. Palestine is one of the last stopover sites for the Pelicans to forage before the crossing of the dry Saharan desert. Nevertheless, The Pelican is a protected bird and solutions to this conflict can be achieved by feeding them in reservoirs with wild fish and away from the fish farms.