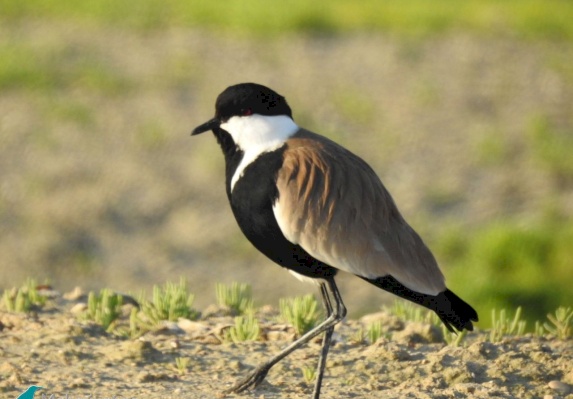 Physical characteristics: Length: 25-28 cms. Weight: 100-170 grams The Spur-winged Lapwing is a slender, pigeon-sized bird with long, black legs. It is noted for its black crown, white cheeks, and thin, black stripe bisecting the throat. Adults have a red eye. The abdomen and chest are black and the upper parts are brown. The beak is thin, black and of a medium length, less than the head diameter. It is named in a few languages for the spur in the wing joint that can be more than 11 mm long in the male and 7 mm in the female. In flight, the contrast of the black tail and flight feathers to the white underwing is striking. The upperwing has a tricolor design, beige on the lesser and medium coverts, white for the rest of the contour feathers, and black flight feathers. The Spur-winged Lapwing resembles the other local lapwings such as the Sociable Lapwing, the White-tailed Lapwing, and the Northern Lapwing, however, the Spur-winged Lapwing is the most common.

Behavior: The lapwing is seen in small flocks during the day, in areas rich in food. Their flight is slow and irregular making a sound that gave it the latin name meaning "little fan". As the breeding season approaches, the lapwings become more territorial, and warn intruders with their loud sharp calls, and physical battles where the male will use his spur. In the winter months, the "homeless" bachelors, and wintering birds, flock together to roost. On cold winter nights they can be seen on the roofs of private houses.

Habitat: The Spur-wing Lapwing is found in open fields with little or no vegetation, usually near a body of water. It is especially common in cultivated fields, lawns, and parks, the banks of ponds, reservoirs, and also on the beach.

Vocalization: The Spur-wing Lapwing is a noisy bird; the characteristic call, a sharp "pweek" can be sounded in quick succession or as a monosyllabic call. It usually calls in flight, synchronizing the wingstrokes with the call.

Breeding: The male will prepare several nesting pits, with a diameter of 10- 12 centimeters, usually with no lining. The female will choose a nest and lay 4 beige eggs with brown spots. Interestingly, the shade of the eggs and their spots can change with the location in order to provide the best camouflage. The lapwings are especially aggressive during the incubation period. An intruder will be greeted by loud warning calls and at short distances from the nest the couple will do a warning display including sharp dives to the intruder's head. In the case of a harmless, large intruding animal (horse, cow), the female will stand on the eggs and spread her wings, making loud angry noises. The males are the more aggressive mate, and the female will not always take part in the warning display. A persistent intruder may even arouse the participation of the birds in the neighboring territory to display, until the message is understood. The lapwing chicks have a yellow plumage with dark spots on their back and light spots on their abdomen. The camouflage is so successful that an intruder can approach a nest without seeing it, if the chicks don’t move.

World distribution: The Spur-wing Lapwing breeds in south-east Europe (Greece, Turkey), in the Middle East, and in a wide strip in central Africa. The increasing population in Europe and Africa (Wetlands International, 2012) is apparently due to its ability to use land cultivated or disturbed by man. In certain areas the population is on a decline due to predation of the eggs and the nest destruction by vehicles.

The Spur winged Lapwing is very common in Palestine near water, in fields and sometimes in the towns.