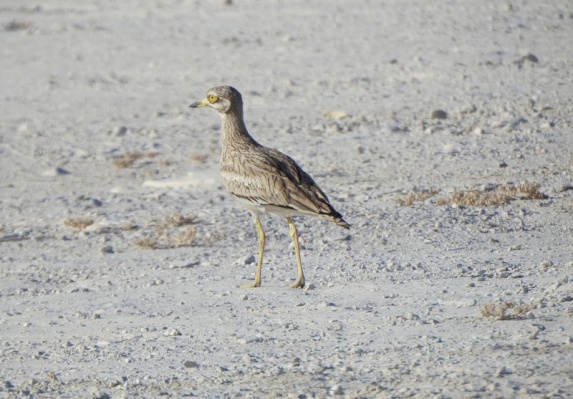 Length: 38-45 cms. Weight: 140-475 grams The Stone-curlew is basically of a sandy-gray color, with streaks of black or brown. The abdomen and underparts are a light color. When the curlew is standing, a wide, white stripe bordered on each side by a thin black stripe is apparent on the wing coverts. The legs are long and yellow, and the sharp, strong beak is yellow at its base and black at its tip. The large yellow eyes are well adapted to its "nightlife". The irises contract during the day giving it the appearance of being surprised or afraid. The tail is wedge-shaped and long enough to protrude well beyond the collected wings.

In flight the bird is unmistakable with its long, narrow, pointed wings which are held in an arched form. Viewed from above, there is a striking contrast between the black flight feathers and the light contour feathers with the black and white stripes. From underneath, the wings are white with a black trailing end.

Behavior: The Stone-curlew is basically a ground dweller and will fly only when necessary. Its behavior and build is reminiscent of a large plover.

When encountering a threat, such as people, the curlew "freeze" all motion or lay on the ground, relying on its coloring as a camouflage. When a threat is too close, the curlew will distance itself with a crouching walk or run, with an erect body and its head held close to its shoulders. When surprised at a close distance the curlew will take a few quick running steps and take off in a short flight, landing and "crouching" on the ground. Often it may let out a few angry calls.

During the day the curlew hides in the shade of bushes or trees, leaving the hunting for the evening hours. The curlew eats invertebrates, small reptiles, amphibians, and rodents. In the winter, when they flock, they spend the day together in roosting spots. In the evening, each bird hunts on its own.

Habitat: The Stone-curlew is found in dry, open spaces such as fallow and plowed fields, sandy areas and rock formations. Unlike other members of its order, the Stone-curlew has no tendency to be near to bodies of water.

Vocalization: The loud calls that pierce the quiet nights are the clue to their presence in the area. Their calls are a succession of wails that sound like a mourning call. They can be heard in many small settlements in the area. The bird is named in several languages for its distinctive call.

Breeding: The breeding season in this area begins in February-March and continues until August. Every couple claims a territory of which they are protective. The male announces his claim with calls and a variety of songs, from the ground and in flight. Their preference for open places leads them to nest at roadsides and even in unpaved parking lots.

The couple dig a shallow pit with a 20 centimeter diameter. Usually two eggs, the size of chicken eggs, are laid. They are a bit elongated, and have a sandy brown color with dark spots.

Both parents take part in the incubation for 25-27 days. The clumsy nestlings are grayish brown with thin black streaks. When their parents give a warning call they stick close to the ground without movement, trusting in their camouflage, until they hear another "all clear" call from their parents.

In the first few days, the parents bring food and place it before the chicks. After a few days, the chicks are rambling around and gathering food for themselves. At the age of one and one half months they fledge and are independent. At two-three years of age they are sexually mature.

World distribution: The curlew can be found in the area ranging from the Canary Islands, North Africa, and Spain to the west, through the Mediterranean area, central Europe, Asia, to India and Burma in the east. In this area 6 subspecies can be found. The European population has dramatically decreased in the last few decades due to loss of preferred habitat as a result of development, forestation, the increase of cultivated fields and changes in cultivation techniques. The situation of the populations in the rest of its locations is unknown.

In Palestine the curlew population is stable and it is a common breeder in all open habitats. In the winter the breeders may be joined by birds from northern areas, forming flocks that may number up to 200 individuals.