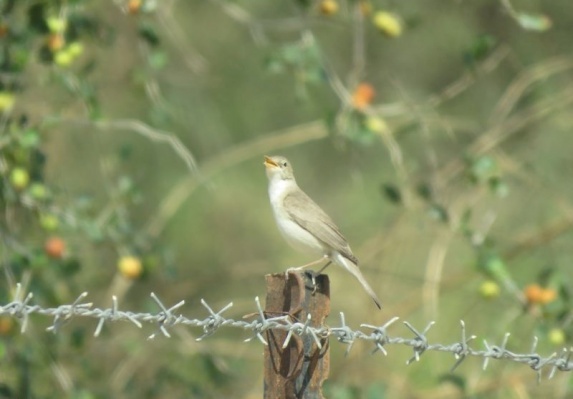 The Eastern Olivaceous Warbler belongs to the Sylviidae (Old World warblers) family in the Passeriformes order.

Distribution: The Eastern Olivaceous Warbler is found in southern Europe, Asia Minor, Central Asia, the Middle East and North Africa. Most of the population migrates and winters in African savannas as far south as Kenya, Tanzania, and Uganda.

In Palestine: Common Fall migrant, particularly from August to September and in spring from mid-March to mid-May. Scarce breeder in lowlands with Tamarisk trees, especially in the Jordan valley.

Habitat: Found in areas of sparse shrubs and trees, riverbeds, tamarisks, forest parks, and urban gardens. Forages high in trees and bushes for aphids, gnats, and other small insects. In migration, eats fruits and drinks nectar as well.

Behavior: The Eastern Olivaceous Warbler likes to jump from branch to branch in the interior part of the trees for foraging. When on guard is sits in the outer parts of the tree and dips its tail up and down in nervous movements.

Breeding: Nests in small territories in Tamarisk groves, sometimes near water. Dangers and threats: Habitat destruction and lime sticks trapping in Southern Europe. Similar species not to confuse with: Similar to Reed Warbler, but noticeable differences in appearance and behavior – greyer, uses dryer habitats and has a wider bill. Details of tail, plumage color, and behavior help distinguish the two. The Upcher's Warbler is slightly larger, has darker tail and rounder head and moves its tail in the shape of the number 8.