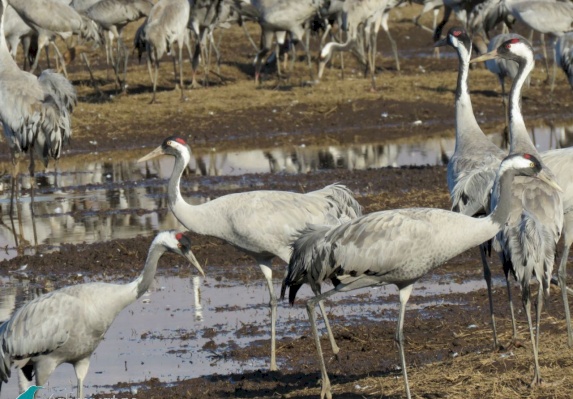 Description: The common crane (also known as the Eurasian Crane) is the most abundant in the world. They fly in V shaped flocks and call loudly to each other.

Distribution in the country and worldwide: Occurs across the whole of Europe, from the UK east to Siberia. Mongolia and northern China. One of the migration routes from birds breeding in Europe takes them through Palestine with many thousands staying to winter around Jenin.

Identification (how does it look like): A huge long-legged, long-necked elegant bird. Appearance is mainly a bluish-grey colour on wintering grounds. Adult birds have a black face extending half way down the front of the neck. A white stripe extends from back of the eye down the back of neck. Top of head has red bald crown. The strong, pointed beak is a pale yellow. In flight, wings are large and rectangular with long fingered primaries like an eagle.

Breeding/mating (season, how and where): Breeding does not occur within Palestine. Cranes will breed on bogs and reed beds within forested areas in northern Europe. They are very protective over their young, often chasing off predators such as foxes. Cranes are very parental, flying as a family group to teach their offspring the migration routes to the wintering grounds in the first year.

Threats and hazards: Climate change and habitat loss will always be a threat to the population, however power lines and wind farms will always be factor for migrating cranes, especially those that fly at night. Damage caused by feeding cranes on farmland was an issue but conservation bodies are successfully working together with farmers and land owners to manage wintering areas.

Similar species not to be confused with: Demoiselle Crane (Anthropoides virgo) is smaller with shorter legs and neck. Body is lighter grey with the black extending from the face down to the breast and a white plume of feathers extending from behind the eye.

Cool facts: The common crane is a bird that will pair for life. It will confirm its bond with its mate by performing a beautiful dance, jumping and head nodding with wings outstretched.