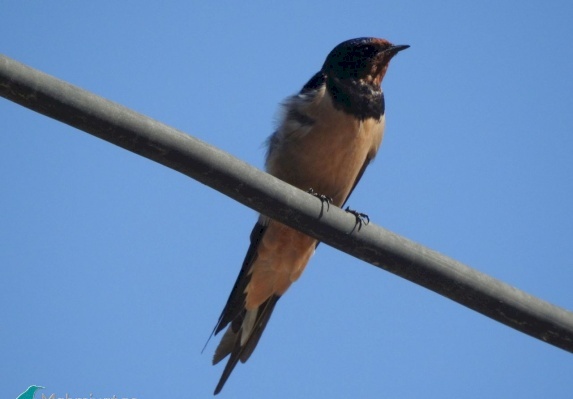 Description: A bird that is familiar around waterbodies and farmland.

Habitat: Found most commonly around agricultural areas where it can nest in world farm buildings and stables. Will also occur around small villages.

Identification (how does it look like): A bird that is familiar to even non-birders. Its metallic blue upper parts and bib contrasting with a white underneath make it a very neat little bird. A red throat patch and forehead adds to its appearance as well as its long tail streamers. Females are very similar to the male apart from slightly shorter tail. Juvenile have a very short tail and have a buffy-coloured throat.

Behaviour: Commonly hunts insects over open ground and water where it can be seen gliding just above the surface. Swallows like other hirundines, spend a lot of time in flight either for catching their insect prey or through sheer enjoyment. They can often be seen in huge numbers perched on barb wire fences or telegraph wires when migrating.

Breeding/mating (season, how and where): A common breeder in Palestine, mainly in the Jordan Valley. Large numbers of Swallows pass Palestine in the migration seasons and sometimes can be seen roosting together in huge numbers (Hundreds of thousands) in reed beds. Nesting begins in March. Nest is a half mud cup, reinforced with plant material. it is located in buildings in towns, barns, under bridges, near fields and open spaces.

Threats and hazards: The use of insecticides has caused a decrease in the population mainly because of their prey reducing in numbers but also through ingestion via secondary poisoning. The lack of field margins has also caused the population reduction of a lot of farmland species including the swallow.

Similar species not to be confuse with: House Martin has the lack of a long tail and has a white rump. Sand Martin has a short tail, brown colour on top and an obvious brown breast band.

Cool facts: Swallows winter south of the equator and begin their migration in the first week of January, but the peak migration in Palestine occurs in March. Hence the well known saying “No one swallow heralds the arrival of spring…”

Distribution in the country and worldwide: Barn swallow is distributed far and wide. It occurs in most areas of North America, Europe, and Asia. Most populations will migrate south to South America, Africa or south Asia respectively. Global populations were estimated at 200 million individuals (Rich et al, 2004).