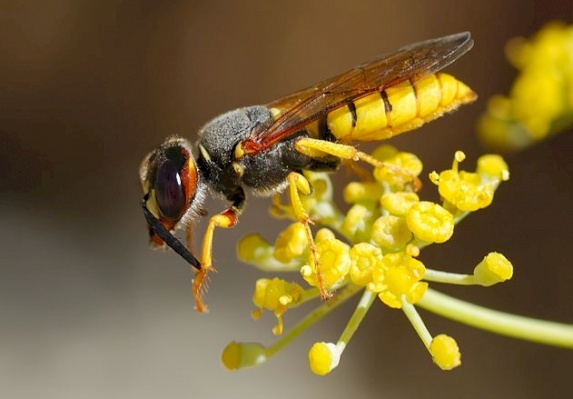 This is a solitary digger wasp species (family Crabronidae), widespread in Afrotropical and Palaearctic regions. Philanthus triangulum is commonly known as “beewolf”, because it fills up its brood cells with paralysed honey bees (Apis mellifera) as larval food. Despite being a solitary wasp, it can also nest in small to large aggregations located in sandy, bare soil. Because they are solitary wasps each female builds up their own nest and provides their brood cells with paralyzed arthropods as offspring’s food resources.

Curiously, this characteristic is the main behavioural difference between wasps and bees: wasps feed their offspring with insects and spiders, whilst bees feed their offspring with pollen, nectar and general plant resources. The female beewolf wasps are between 13-18 mm long and the males are 8-10 mm long, both sexes with bold body and yellow and black marks. Males have a trident-like facial whitish spot that looks like a little crown. Nevertheless, the body colour of males and females may strongly vary. These wasps have short and thick antennas and the abdomen is usually predominantly yellow, with black transverse triangular marks. However, these black marks can be replaced by red brown tone. One distinctive characteristic is that females have notable bristles on the front tarsus.

An interesting particularity of P. triangulum is that their major prey species, in all the places where this wasp is distributed, is the worker honey bee. In some regions the wasp may even greatly reduce the local honey bee populations. Females of P. triangulum paralyse honey bees by stinging them, carrying afterwards the bees in flight to their nest, where the prey will serve as larval food. The nest consists of an up to one meter long tube dug in the ground by the female and ends in five to seven chambers, where the brood cells are located. Each brood cell will be provided with one to five honey bees, so that the larvae can feed on the prey and spin its larval cocoon. Larvae mostly overwinter and emerge next summer. Depending on the climate conditions or on warm locations, these wasps can have two generations per year (bivoltine). Males do not participate of the nest construction.

Another outstanding feature of P. triangulum is their capacity to protect the offspring against bacterial infections and fungus. Since the air into the brood cell chambers is warm and humid, pathogenic microorganisms may infest the prey, reaching and killing the larvae. Thereby, this wasp species evolved two ways to reduce larvae mortality. One way is to decrease and retard fungal growth on the prey honey bees, by applying on them large amounts of a substance produced by its cephalic glands. The other way is using a product of the very specialized antennal gland. The female wasp secrets a substance containing symbiotic bacteria of the genus Streptomyces in the brood cells. The wasp larvae take the bacteria and apply to its own cocoon, reducing fungal infestation and protecting, therefore, the offspring.

Chemical substances play also a role for the establishment of territories by the male beewolf, mostly close by the females nest aggregations. Using the pheromone from cephalic glands, males mark their territories and defend against invader males, fighting with them in the air, without touching their enemy. Since there is no kind of visual display preceding the copulation, females understand the pheromone communication of males as a sexual attractant.