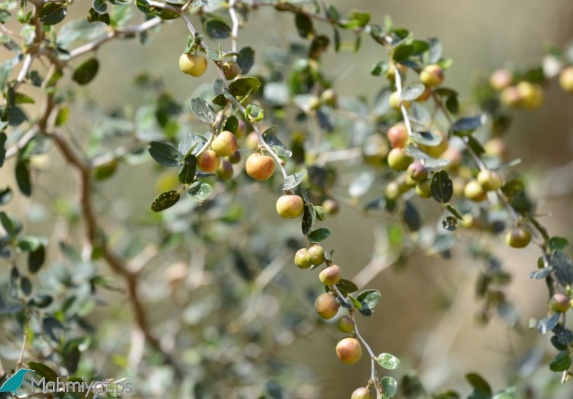 The jujubes are a genus of spiny shrubs and small trees in the buckthorn family (Rhamnaceae). They have egg-shaped leaves, small yellow-green flowers and small round edible fleshy fruits. The flowers secrete abundant viscous nectar, and are very attractive to flies, wasps and honey bees. The fruits are also rich in sugars and are eaten and dispersed by birds and mammals.

Lotus jujube is a deciduous shrub of mostly southern Mediterranean distribution, flowering in spring. The jujubes are most common in Nablus mountains (north) and the Jordan Valley, where they create a savanna-like vegetation of grasses and shrubs. The Christ's thorn jujube occupies diverse habitats and is also common around the Dead Sea, and more rarely on deep soils in the western mountainous part of the country.

As its name suggests, Christ's thorn jujube is traditionally believed to be the tree from which Jesus's crown of thorns was made, although it is rare in the vicinity of Jerusalem. Many individual trees are venerated and traditionally associated with historical or magical events.

The lotus jujube, on the other hand, is often regarded as the Lotus tree of Greek mythology, mentioned in Homer's Odyssey.

The jujubes, especially Christ's thorn jujube, have been traditionally used by humans for diverse purposes. The fruits are collected by local villagers and eaten fresh or dried. The wood is used for craftwork and as a fuel. The medicinal uses of various parts of the plants are numerous.