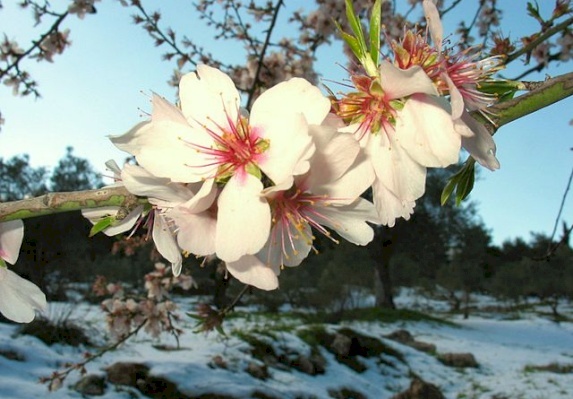 The almond is a deciduous tree in the rose family (Rosaceae). It has elongate leaves and white to light pink flowers. Almonds bloom in winter and early spring (December to March), before the appearance of the leaves. The flowers are self-incompatible, meaning that they need to receive pollen from other blooming almond trees in order to set seed. This is achieved by a variety of pollinating insects, especially bees, that fly among the flowering trees and transfer their pollen. To attract more pollinators, many trees bloom early when there are only few wildflowers around. The fruits take several months to develop and mature, and are harvested in autumn. Unlike the cultivated almond, wild and feral almond trees produce bitter, inedible seeds that contain a toxic substance, protecting them from predators. Wild almond and feral almonds occur throughout the mountainous regions of Palestine, and are especially common in the Jerusalem Mountains. Trees growing in more arid climates are often shorter and spiny, with smaller leaves, flowers and fruits, and were once considered a separate species (Prunus korschinskii). There are different theories regarding the origin of the cultivated almond. Some researchers regard the wild populations growing in the Levant region, including Palestine, as the origin of the cultivated tree. Almonds have been cultivated throughout Palestine for millennia, and used traditionally in a great variety of dishes, especially in confectionery and pastries, but also in savory dishes, and as a milk substitute. The green developing fruits ("green almonds") are also a common snack, usually pickled or sprinkled with salt. The seed is extremely nutritious, high in protein, vitamins and minerals, and may reduce blood cholesterol.