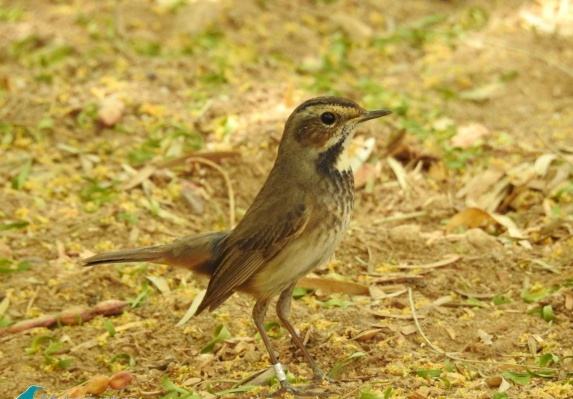 The Bluethroat belongs to the Muscicapidae family in the Passeriformes order. It is 13-14 cm in size and 11-23 grams in weight. The Bluethroat is a relative to the Nightingale but slightly slimmer, with long and strong legs and a rounded tail which is rusty-red at its base and black at its tip. In spring the males have a bright blue color on their throat and chest with black, white and red border lines. The center of the blue color may contain a red or white round spot depending on the subspecies, five of which can be found in the area. The male coloring is faded in the autumn but at the end of winter, a partial moult will give them the bright blue bib. The females are of a relatively faded in coloring and instead of blue color on the throat, they have dark striping on a pale background. In older females the throat may acquire a blue color and then they will be similar to young males. The Bluethroat usually runs on the ground, and suddenly stops while lifting its tail and droping its wings down. They can be spotted on the ground or among low bushes. While they are usually shy and hidden, they can be spotted while they are searching for insects, their major food source. They move their heads from side to side and lowering it down in order to see and hear their prey. The tail is constantly moving, depending on the mood and activity of the bird. In the spring, they will sing from the tops of bushes or other view points, but will hide in the bushes at the approach of people. They have a varied repertoire, as expected of a nightingale, including humming, clicking as well as melodic singing. The Bluethroat breeds throughout Europe, north and central Asia and it winters in Africa, the Mediterranean area, the Arabian peninsula and India. The Bluethroat is very common during migration seasons, especially near bodies of water and humid fields and more than 70% of the birds noted are juveniles. It is also a very common wintering bird. The migration in spring is from mid February to mid April and in autumn from mid September to mid December.