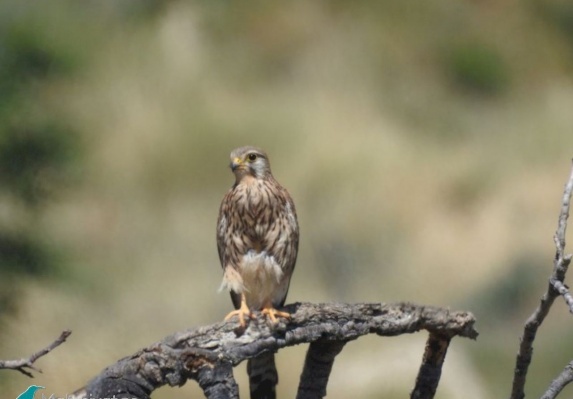 The common kestrel belongs to the Falconidae family in the Accipitriformes order. It is 31-37 cm in size, 140-250 grams in weight and with a wingspan of 68-78 cm. It is a small raptor that uses diverse habitats, including urban areas, and is the best known member of the Falconidae family. It is a bit larger than the lesser kestrel, the red-footed falcon and the merlin. The kestrel has a long tail and medium sized wings with rounded tips. The upper wings are chestnut brown with dark brown flight feathers. The male is smaller with a more delicate structure and is more colorful than the female. The chestnut colored back has black spots across it; the head and tail is uniformly blue-gray which accentuate the dark mustachio stripe on the cheek and black terminal bar on the tail. The chest and abdomen are sandy yellow with small black streaks. The female is duller, mostly brown with black streaking. The tail is grayish brown with thin black bars. In flight, the wing beats are shallow compared to other falcons. While hunting, it is known to hover and maneuver with its tail. When prey is identified, the falcon flies lower for a better look and then with collected wings it dives down in a steeply towards its prey. The dive may sometimes be at a more graduated slope, especially when starting from a perch, or aiming birds in flight. Hovering is not a distinguishing behavior of the kestrel as it is seen in the lesser kestrel and the red-footed falcon as well. While soaring, with wings widely spread, it can resemble a sparrow hawk, which however has wider, rounder wings, and an s- shape to the flight feathers. The kestrel adapts easily to a wide variety of habitats, from sea level to the heights of 3,500 meters, from urban centers to open grassland, cultivated fields and meadows. The call of the kestrel is a rapid "ki.ki.ki.ki". Farmers are known to build nest boxes for the kestrel who eats the rodents in their fields in return. The kestrel breeds in almost all of Europe, Asia and Africa with the exclusion of the areas with extreme climates of north Asia, the deserts of Africa and the Himalayan Mountains.