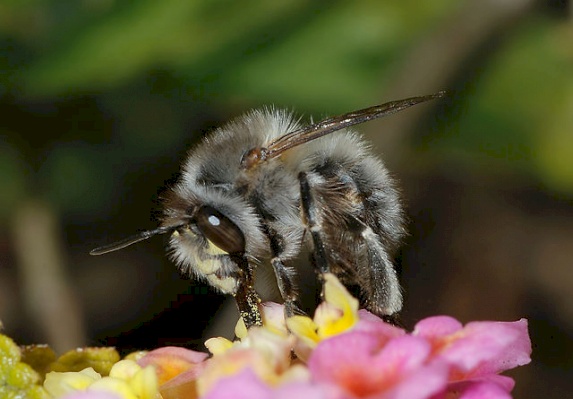 Anthophora spp. (species of the genus Anthophora). This is a genus of robust and fast flying bees. Anthophora is abundant in the Holarctic and African regions, but scarce in the neotropics and Southeast Asia. To date there are around 410 species of Anthophora worldwide, from which 59 are found in Palestine and wider area. Some species such Anthophora plumipes (known as hairy footed flower bee) are even widely distributed in Eurasia, from Britain east to China and Japan and abundant in Palestine area. This genus clusters bees that have dense hairs on their body, hence the English common name “fur bee”.

Anthophora species are 8-18 mm long and may look similar to a bumble bee, due to their brownish colouration and dense hair on the whole body. The hind leg of the male is often modified with brushes of hair on the middle tarsus. Males commonly have pale white or yellow facial markings. The middle legs of males A. plumipes, for example, are very elongated with long tufts of black hairs on the tarsi (hence the Latin word plumipes), used as a visual signal during mating.

All species are solitary, not building colonies, though many nest in small to large aggregations. Nearly all species make nests in the soil, either in banks or in flat ground, or even in clay slopes and steep walls of mud. Curiously, some species of Anthophora can soften the soil with water to better dig it and build up a nest. The larvae feed on pollen and nectar provisioned by the mother, develop in cells with waterproof linings and do not spin cocoons. In addition, males hatch until three weeks earlier than females. Anthophora spp. forage on several plants (polylectic) and fly mainly from March to September. Moreover, nests of Anthophora may be parasitized by bees of the genus Melecta, Thyreus and Coelioxys.

List of species of the genus Anthophora distributed in Palestine and wider area.