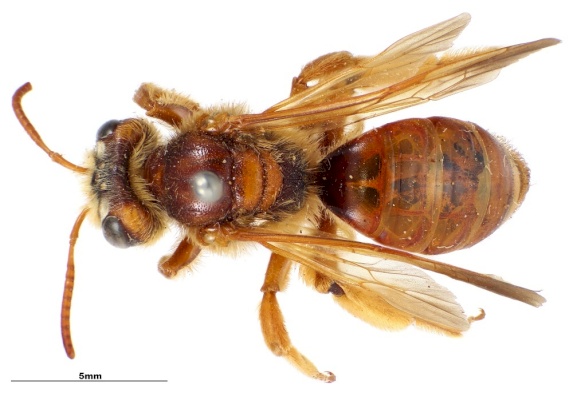 This is a solitary bee species, commonly and originally distributed in Middle Europe, Mediterranean basin, North Africa, West Asia, including Palestine and wider area and further towards East, including Kazakhistan, Pakistan, Tajikistan and India.

This is a medium size black bee, whose females have mostly black thorax and abdomen. It has, however, sometimes reddish thorax and head. Females Andrena fuscosa has dense long, erect, black hairs (a little brownish) on the whole body, except on the hind tibia, where the hairs are yellow/orange, forming the scopa. The eyes are very lateral and the clypeus is densely punctuated with edges. The thorax is also rich in punctuations and the wings are very dark brown. Males have black long hairs on their face.

Andrena fuscosa bees are pollinators of the common orchid Ophrys mammosa. The Mediterranean orchid genus Ophrys imitates the coloration and body format of female bees for attracting males in a species-specific manner: the males attempt to copulate with the labellum of the flower. During this false copulation, the males remove the pollinia (a small bag containing pollen, typical from orchids) with their heads. The male carrying the pollinia is then attracted to another flower of the same Ophrys species and that flower can become pollinated. Amazingly, each Ophrys species has its own pollinator species (species-specific interaction), which ensures the flowers their own genetic isolation from similar Ophrys species. This behaviour is a magnificent example of the most pure coevolution.

The orchid Ophrys mammosa is pollinated uniquely by A. fuscosa, but that does not mean that the bee visits only this plant. Instead, A. fuscosa also forages on plant species of the families Brassicaceae, Lamiaceae and Fabaceae.