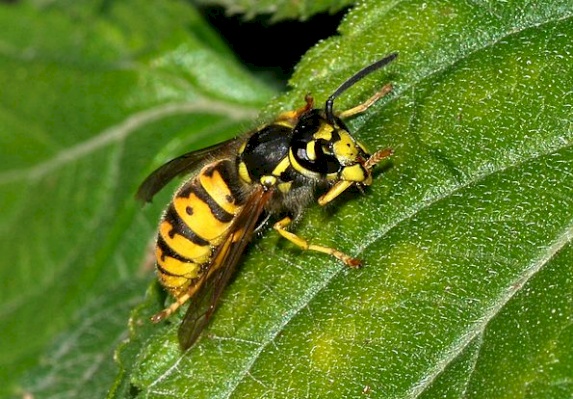 This is a very common and social wasp species, originally and commonly distributed in Europe and the whole Palaearctic region, native also in Palestine and wider area. Known as German wasp, or German yellow jacket, due to their yellow and black colours, it belongs to the Vespidae family. This wasp species is nowadays widespread in many places, such South Africa, Argentina, Chile, Australia, New Zealand and USA as an introduced and well-established species. Thereby, V. germanica can be a pest in most areas beyond their native range, prompting a greater concern about the control measures. Additionally, these wasps feed on several species of native arthropods (polyphagous), competing for food with many other animals, harming the native wildlife of the invaded areas.

Vespula germanica workers are about 13 mm long, but the queen can be to 20 mm long. It is similar to the common wasp Vespula vulgaris, hence tricky to distinguish these species in the field. However, unlikely V. vulgaris, the German wasp has three small dots on the clypeus (front face, bellow the antennas). German wasps have some black dots on their abdomen, differently form the V. vulgaris, whose abdomen markings are fused with the black rings above them, forming a different drawing.

As a social wasp, V. germnica nests in colony, composed by workers and a queen. The nest is made out of chewed plant fibres, mixed with saliva. The beginning of a colony occurs when one single queen begins to build its nest in spring, by constructing a series of hexagonal cells, in which the eggs will be laid and the development from larvae to pupae and to adult will be completed. The new individuals will hatch in summer, rapidly increasing the nest size. In the end of summer the colony growth will slow down and the workers will invest on the production of queens and males. In autumn, the new queens hatch and hibernate, whilst the old queen and colony die. It may occur that the colony survives for the next year, then reaching a much larger size than in the year before. Nests are mostly found below ground, but sometimes they nest in artificial surfaces, such as attics.

Nests of German wasps are influenced by the climate, hence the colonies in warmer areas are much larger than colonies in more temperate climates. For example, in Australia a colony can reach 15000 workers, while in England they reach up to 9500. In warmer areas the nests are more likely to survive the winter. After hibernating, a jung queen will mate with up to seven males (polyandrous). Each of the mating events is independent of the other, so that males cannot discern if the female has already mated or not.

Most interestingly is that V. germanica has an outstanding good memory and learning capacity. Memorizing local landmarks, this wasp can forage on one source of food and revisit the same source, so long as food is still available. However, they can fast forget the source, if it no longer provides a reward.