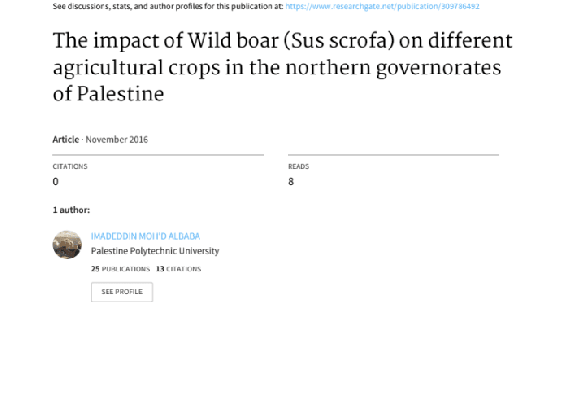 The wild boar or wild hog (Sus scrofa) is an exotic, invasive species that has major impacts on different Agricultural crops in the northern governorates of Palestine. Today wild boar is the largest mammals in Palestine [1, 2]. According to the 19th-century expeditors, wild boars were abundant throughout Palestine, including the arid regions [2, 3, 4, 5]. We applied interviews to the local residents and realized 8 routes, each 3 kilometers long in different agricultural fields in Salfite; Nablus; Qalqilya; Tulkarem, and Tubas governorates. We collected data at 50 points. The impact of feral hogs on Cereal crops like (Barely, wheat, and lentil), horticulture fields including (Almonds, stone fruits and olive trees), as well as the vegetable crops fields, (tomato, squash, sweet pepper...etc) was recorded in 180 quadrants (each 100 m 2), some containing evidence of feral hogs and others did not. The most impacted vegetation is the horticulture including (Olive trees, (41.3%) Almond's and stone fruits (38.7%), followed by the Cereal crops, (38.1%), and vegetable crops (36.8%). Our results indicate that the best methods for controlling the hogs populations are by applying the poison including (Lannate and Ro-Stop 90), with (54.3%), and normal metal fence, with (43.9%). None of the investigated fields is using power fence. The use of different in size mechanical traps approach was much lower and less effective just 3.8%. The peak of hogs damage and encounters were in April to June, with 23.1%, while the less damage and encounters were in December to January 3.1%.