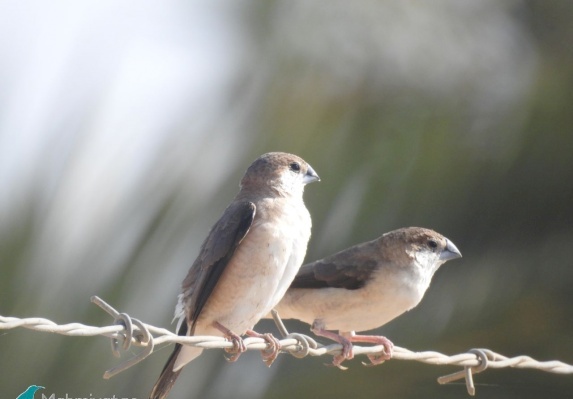 Small bird found in the Indian subcontinent, a resident bird that breeds most commonly in the drier regions of the Middle East and the Indian subcontinent. It has also been introduced to many other parts of the world and has become well established in some areas. In adulthood, its beak is 11-11.5 cm long and has a silvery-gray conical bill, orange-brown upperparts, white underparts, yellowish wings, and dark wings. The tail is black and the wings are dark. The tail appears pointed as the feathers are shorter in length from the centre to the outside.

It feeds mainly on seeds, but also on insects, and has been known to visit nectar-bearing flowers. It visits dry, open ground, wastelands, and farmland, sometimes near water. Although it is found mainly on the plains, it can be found at an altitude of about 1,200 meters. It is found in Pakistan, Nepal, Bangladesh, India, Sri Lanka, Iran, and Palestine. It was introduced occasionally in many other parts of the world, where it became a resident in Jordan, Palestine, Kuwait, and Oman.

A social bird found in flocks of up to 60 birds. They feed in the ground or on low shrubs and grass stems. They feed on a wide variety of weed seeds and benefit from crop species. Breeding season varies by region. They nest in winter in southern India and after summer in northern India. The nest is an untidy ball of grass with a slot on the side, placed in low bushes, sometimes they build their nests under the nests of eagles or storks and use old nests, they have a variety of environmental habitats such as wooded lands, desert, dry and urban areas, They are also common as a bird pet reared in cages.