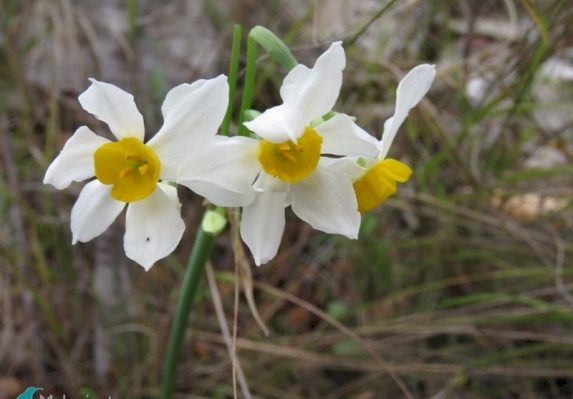 Narcissus tazetta, which belongs to the Amaryllidaceae family, is a perennial plant bearing a small round bulb and very elongate flat leaves. The showy flowers have six white petals and a yellow, cup-shaped corona, and emit a strong, sweet fragrance. In the Levant region, the plant has two variants (called "ecotypes") that differ in morphology, habitat, flowering period and pollinating insects. The most common variant grows in rock crevices in the mountains, blooms from October to December, and is pollinated by hover flies and bees; the second variant grows in flooded soils in the valleys, bloom from January to February, and is pollinated by hawk moths. Both variants go dormant in the summer months. The species is distributed throughout the Mediterranean Basin. Being commonly cultivated for centuries as garden plant, it is now also naturalized in parts of Central and East Asia, Australia and the Americas. In Palestine, the species is common throughout the mountainous western part of the country. There many garden cultivars of Narcissus tazetta, some of them bearing fully white flowers. The species  is also grown to produce a strongly fragrant essential oil, which is used in herbal medicine. One of the chemicals isolated from the plant has shown antiviral activity against the influenza virus. All species of Narcissus are toxic to humans and other mammals. The bulbs and leaves contain the alkaloid lycorine, which inhibits protein synthesis. Cases of poisoning and even death have occurred when people mistook the bulbs for onions or leeks. The Latin name of the genus derives from the Greek myth of Narcissus, an arrogant boy obsessed with his own beauty.