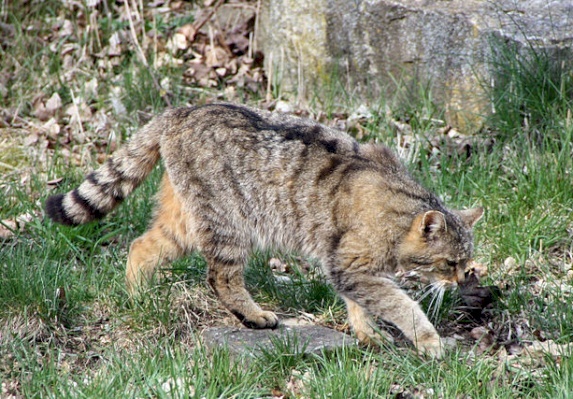 Picture resource: By Schorle (Own work) [GFDL or CC BY-SA 3.0], via Wikimedia Commons

The wild cat belongs to the felidae family of the carnivora order.
One of the most common mammals can be found, both near and far from human settlements, the wild type for the domesticated cat (Felis silvestris catus). It is the same size as the domesticated cat and the main difference is the color scheme- it is grey-brown-yellow with a set of 3 black rings around the tip of the tail and a black stripe on the inner part of the front leg. It is a carnivore and feeds on small-medium size mammals, reptiles, birds and large invertebrates. When found near water sources, can also hunt shallow-water fish and amphibians. It is very difficult to distinguish the wild cat from the grey colored domestic cat and one of the main threats to the species is the hybridization with domestic cats and the loss of genes so the populations are leaning towards the domestic cats. Similar threat exists also with the grey wolf and the domestic dog in different parts of the world. The wild cat can be found all around the country in most of the terrestrial habitats, including dry riverbeds in the desert. The geographical range of the species includes most of Africa, central and eastern Europe, Spain, the near east and central Asia.