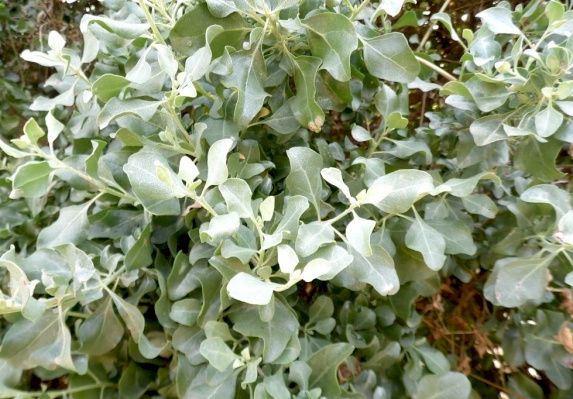 Shrubby Saltbush belongs to Chenopodiaceae family in the Caryophyllales order. It is an evergreen shrub growing to 2-3 m at a medium rate. It is a halophytic shrub that is widely distributed in arid and semi-arid regions around the Mediterranean basin. It grows on a variety of soils, from fine to coarse texture, with varying degrees of salinity. Leaves are ovate-deltoid, or oblong ovate ,alternate which means one leaf per node , entire, covered with several layers of vesicular hairs, and the leaf margin is smooth. Flowers are with green petals, Staminate and pistillate flowers (monoecious) where glomerules many-flowered forming congested lateral and terminal spikes.

Male flowers: perianth small, very few in number than female flowers. Flowers are pollinated by wind and flowering from April to October. Stems are mealy shrub, creeping rootstock, 100-200 cm tall; branches from the base, and covered with several layers of vesicular hairs too. Fruits are minute nutlets enclosed in 2 leathery scales, entire or serrate dentate and has homogeneous seeds-fruits.

Ecology : This plant grows at Salty habitats, and it is halophyte in terms of salt resistance. It is not spiny plant and it is blatters in terms of Succulence. It follows the Med-Saharo-Arabian Chorotype. It is mostly natural, and also synanthropic. The importance of Shrubby Saltbush in the functioning of ecosystems is reflected in its promotion of soil biota, while it also acts as a food plant for mammals and arthropods. Its deep root system decreases soil erosion in arid zones. Due to stabilization of the soil, the protein-rich shoot material made it important fodder species for livestock, particularly sheep and goats. This plant is often cultivated as forage because tolerating severe conditions of drought, and it can grow up in very alkaline and saline soils. In addition, it is useful to valorize degraded and marginal areas because it will contribute to the improvement of phytomass in this case. The ash from the burnt plant is used as the alkali in making soap. The plant makes a superb wind-resistant low-growing hedge that can be allowed to grow untrimmed or can be trimmed.

Medicinal use: The shoots are burnt to produce an antacid powder, Leaves are used for heart diseases, diabetes and rheumatism. Studies report that the aqueous leaf extract of A. halimus has beneficial effects in reducing the elevated blood glucose level and hepatic levels in streptozotocin-induced diabetic rats.

Cool Facts : The plant is extremely tolerant of pruning and can regrow even when cut back into old wood. The plant draws salt out of the soil and so has been used in soil-reclamation projects to de-salinate the soil.

Distributions in Palestine : Nablus desert, Jerusalem desert and Dead Sea valley, in addition to the coastal areas and along the shore area in Gaza strip .